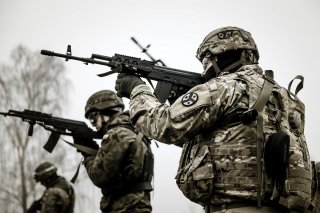 “The PLA would take resolute military action and realize reunification by force,” is the wording used in a Global Times article describing China’s response to a potential U.S. move to place troops on the island of Taiwan in a direct move to deter Chinese hostility.

The Chinese-government backed newspaper calls the possibility “a move that would break the Three Joint Communiqués between China and the US that stipulated all US forces and military installations withdrawn from the Chinese island.”

The suggestion reportedly came from a September-October 2020 issue of a U.S. journal called the Military Review. There are no formal indications that the Pentagon is even considering such a move, however, the question does raise an interesting possibility.

Or perhaps it might function as a deterrent, given the seriousness of recent Chinese provocations and operations near and over Taiwan. China has not only flown fighter jets and surveillance planes off the coast of Taiwan but also sent two carriers to the area and conducted extensive countermine and amphibious assault maritime combat operations.

Most recently, the Global Times reported Chinese J-20s circling Taiwan along with the presence of multiple Chinese surveillance assets in the region in an attempt to prepare for what the paper called “real combat.”

Nonetheless, there is also a clear argument to be made that a U.S. move of this kind might be considered a major provocation and, perhaps of even greater significance, not necessary. The Pentagon has been clear with its message that any Chinese attempt to invade Taiwan would immediately be met by massive U.S. retaliation, and the U.S. does have other places where it could post large numbers of troops.

The U.S. Army presence in the Pacific, while less recognized than Navy and Air Force drones, bombers and fighters in places like Guam, is quite substantial. Hawaii may be too far for a rapid response, but the U.S. does have a substantial network of allies in the Pacific, including The Philippines, Australia and other nations close enough to Taiwan to function as deterrence against any invasion. The persistent presence of U.S. and allied surveillance in the region would likely see any kind of Chinese attack on Taiwan in enough time to quickly respond with large amounts of force.

There would be a challenge, however.

U.S., Taiwanese and allied defenses would, at least initially, need to be successful from the air and sea given that deploying sufficient numbers of ground troops to the island of Taiwan in time might present a challenge. Therefore, U.S. surveillance would need to be extremely sharp and effective to spot a Chinese attack early in the process, so as to properly cue submarines, surface ships, aircraft and air defenses to prepare to mount a massive defense against any Chinese aerial or amphibious attack.

Image: Soldiers assigned to Task Force Raider take part in a Polish-led Spartan Training at Bemowo Piskie, Poland Dec 4, 2018. The ability to be on the cutting edge is significantly tied to how well nations share with each other what they are experiencing and learning.