The U.S. Army Looks to the Cloud to Win the Next Big War 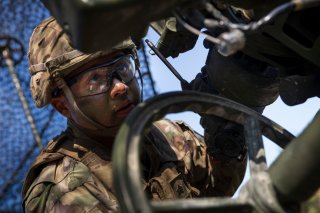 While many are familiar with the role of AI, radio and satellite connections, digital moving maps and other command and control systems, there is a less-often recognized technology upon which virtually all of this may rest when it comes to information sharing… the cloud.

“Cloud data is essential, yet it requires constant calibration. Data has to have the same standards to travel over the cloud architecture,” Army Secretary Ryan McCarthy told reporters on the way to the service’s 2020 Project Convergence experiment at Yuma Proving Grounds, AZ.

Moving and accessing data through the cloud is a fundamental premise that continues to inspire the lightning speed at which the Pentagon and military services are sprinting forward with cloud migration. Army weapons developers see cloud connectivity as essential to its transformational approach to new applications of “networked” Combined Arms Maneuver.

The thrust of Project Convergence, an experiment in the Arizona desert intended to bring new high-speed information sharing across weapons systems, sensors and human-led command and control. Ubiquitous data sharing is enabled by cloud migration, a process that reduces a cumbersome hardware footprint and facilitates multiple points of entry for otherwise inaccessible or separated intelligence information.

The success of information sharing across combat nodes in need of instant targeting intelligence, McCarthy explained, rests upon the need for “uniform data to migrate over the cloud.”

“Weapons systems can't have different types of capabilities that can't communicate. It is a software challenge. All the systems have complex software to establish the fire solution,” McCarthy said.

McCarthy’s reference to software speaks to the technical foundations of the cloud, as emerging software applications can both secure and expedite the exchange of information, thereby bringing the ability for AI-enabled computer systems to access more variables for analysis. Perhaps one location has force position, navigational or threat details of relevance to other nodes or elements on the network … cloud applications can enable one location, node or point of conflict to see and access the same data from multiple other locations at one time. This expedites the desired “speed of decision-making” made possible by the kind of combat convergence sought after by the Army.

Through software upgrades and increased virtualization, cloud migration can bring great advantages and risks. Greater access to information opens new dimensions of combat-sensitive data sharing, but could also give a potential intruder broad access to otherwise less-accessible pools of information. This is part of why data on the cloud can still be scaled and segmented as needed to some extent, and entire networks can be hardened. Should one software fix or patch be applied in a specific location, it can quickly bring benefits across multiple nodes.