This New Russian Plane Could Cause Some Serious Problems for NATO 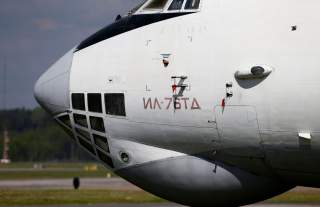 Russia’s air force will start to receive new Beriev A-100 Airborne Warning And Control System (AWACS) aircraft starting around late 2020 or early 2021. The AWACS should significantly boost the capability of the Russian Air Force to gain and maintain air superiority when coupled with capable fighter aircraft such as the Sukhoi Su-30SM Flanker-H and the Sukhoi Su-35S Flanker-E.

The Russian Ministry of Defense is expected to sign a production contract for the new AWACS, which would replace the Russian Air Force’s existing fleet of Beriev A-50 Mainstays sometime next year. “We expect a detailed discussion with the Defense Ministry of the A-100 aircraft serial deliveries contract by the end of this year or in 2019,” Yuri Slyusar, president of Russia’s United Aircraft Corporation, told the state-owned TASS news agency.

While the detailed negotiations between the Russian government and the manufacturer are expected later this year, Russian defense industry sources are confident that production aircraft will start to be delivered to the Russian Air Force in only a few years. "Serial supplies of the aircraft will start in 2020-2021," a Russian defense industry source told TASS.

The A-100 should be a marked improvement in capability over the A-50. Based on the Ilyushin Il-76MD-90A, an improved and modernized the Il-76MD strategic airlifter that is manufactured in Ulyanovsk by Aviastar-SP in Russia rather than in the Uzbek city of Tashkent as it was during the Soviet-era. “Replacement of standard D-30KP2 engines with much more up-to-date PS-90A-76 ones, installation of a modified wing and a reinforced landing gear significantly extend the aircraft performance,” states the company’s description of the modernized airframe.

The A-100 takes the improved performance of the Il-76MD-90A airframe and marries it with a Vega Radio Engineering Premier 476 hybrid mechanical scanned/active electronically scanned array radar that is similar in concept to the approach found on the Northrop Grumman E-2D Advanced Hawkeye. “The new radar system comprises a rotating antenna capable of active electronic vertical scanning and mechanical bearing scanning,” as Russian conglomerate Rostec described. “The radar antenna makes one revolution every five seconds.”

If Rostec’s descriptions of the A-100’s performance are accurate, the new Russian AWACS should offer formidable performance. “The new A-100, equipped with powerful panoramic surveillance radars and state-of-the-art computers will be capable of scanning the airspace for hundreds of kilometers in every direction, identifying targets and sending complete targeting data to anti-aircraft and anti-missile defense systems enabling them to shoot down the targets,” Rostec said. “New-generation aircraft with these capabilities can be used as airborne command posts making it easier to control air, ground and naval groups and task forces.”

With its new AESA radar, the A-100 should offer an enormous improvement in detection and tracking capability against both air and surface contacts compared to the current A-50 and A-50U. However, it is unclear how well the new system will compare to existing Western systems such as the  U.S. Air Force’s E-3 Sentry, however it is very possible that the A-100’s AESA technology will give the Russian jet an edge over the American aircraft. The latest E-3G Block 40/45 use the Northrop Grumman APY- 2, which uses a passive phased array antenna to scan vertically in the S-band while it scans mechanically in the azimuth.

The Russian Air Force currently operates 15 A-50s and four A-50U aircraft. The Russian Air Force will almost certainly replace its entire fleet of A-50s and A-50Us with the much more capable A-100, the first example of which is expected to make its first flight by the end of the year. The question is really one of timing—it is dubious that the A-100 will make it into production as quickly as the Russian Air Force might hope given the ambitious schedule.