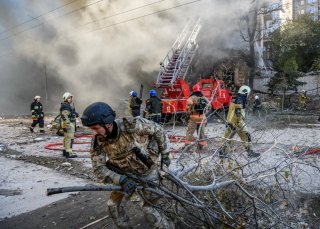 Fresh Russian strikes have hit the Ukrainian capital of Kyiv and several other major cities, according to local officials.

“The Russians terrorize the Kyiv region at night. We have several arrivals in one of the communities of the region,” Kyiv regional governor Oleksiy Kuleba wrote on Telegram. “Rescuers and all emergency services are on the scene. The elimination of the fire and the consequences of the impact is ongoing.” It is unclear which targets in Kyiv were hit and whether or not there were any casualties. Volunteers in Ukraine’s capital city are leaving emergency kits in elevators to be used in case of blackouts, according to local reporting.

Six explosions were recorded in the strategic southern city of Zaporizhzhia. “At night, the enemy attacked the neighborhood of the regional center. An infrastructure facility was destroyed. A fire broke out,” said Zaporizhzhia regional military administration head Oleksandr Starukh.

“At night, there were strikes on a large energy facility in one of the regions, because of this we have a large deficit in the Central region. This applies to the Kyiv, Kyiv region, Zhytomyr, Cherkasy, and Chernihiv regions,” deputy head of the Ukrainian president’s office Kyrylo Tymoshenko told Ukraine’s Rada TV channel, according to Russian state news outlet TASS. Tymoshenko said authorities are still assessing the extent of the damage and how long repairs will last. The official warned blackouts are occurring throughout central Ukraine.

The Thursday attacks are the latest in Russia’s new systematic effort, which debuted on October 10, to target critical Ukrainian energy infrastructure. The strikes are believed to have been mainly carried out by missiles and Iranian-made Shahed drones, rebranded by Russia as Geran-2 UAVs. Iran has consistently denied supplying Russia with military drones to be used in Ukraine.

Ukrainian president Volodymyr Zelenskyy said last week as many as 30 percent of Ukrainian power stations were destroyed by the Russian strikes. Large swathes of Kyiv are facing outages, according to local reporting. Kyiv authorities announced they are implementing a schedule of pre-planned blackouts to mitigate outages caused by the attacks, according to CNBC. Ukrainian officials previously urged locals to reduce their power consumption voluntarily in order to ease the strain on Ukraine’s power grid. “We save electricity as much as possible… turn off electric heaters, washing machines, boilers. This applies to everyone. Today, even one saved kilowatt is a help to our energy system,” Kuleba tweeted last week.