Shahed 129: This 'Iranian' Drone Could Be Getting a Deadly Upgrade 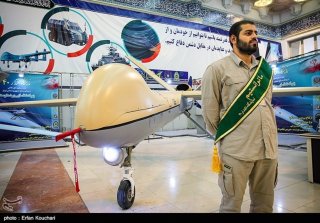 Here's What You Need to Remember: Although Iranian drones have usually taken an observational role, rather than a direct-action stance, Iranian drone capabilities have slowly been shifting towards an offensive ground attack role.

Iran’s drones have typically been knock-off western technology with limited ordinance capacity and very limited range when compared to their American counterparts. But, Tehran’s drone program be getting a GPS boost.

Iran’s drone program operates a variety of Unmanned Arial Vehicles (UAVs). The backbone of their UAV program is the Shahed 129, a large-sized armed drone, visually similar to the American General Atomics MQ-1 Predator, though the Predator is a vastly more capable platform.

While the earlier (presumable first-generation) Shahed 129s had a thinner, more pencil-shaped fuselage, the newer models have a distinctly Predator-like nose bulge, presumably to accommodate a synthetic-aperture radar antenna, a higher-resolution radar system, or perhaps a link for satellite-based navigation.

The early-model Shahed 129s (and possibly the newer models as well) were limited not so much by fuel capacity as by their data-link capacity.

The United States’ MQ-1 Predators can be operated from virtually anywhere in the world, while the Shahed 129 is reliant on a ground operator. If true, dependence on a ground-based controller would likely limit the Shahed 129’s range to 200-400 kilometers (125-250 miles).

In 2015, a Shahed 129 crashed near the Iran-Pakistan border. This early-model Shahed may have flown outside of the ground-based controller’s range or run out of fuel. Photos of the downed drone showed what appeared to be two or possibly four hardpoints for bombs and/or missile attachment.

Although Iranian drones have usually taken an observational role, rather than a direct-action stance, Iranian drone capabilities have slowly been shifting towards an offensive ground attack role.

Iran’s drones have been wreaking havoc in the Middle East. This video shows a Shahed 129 taking off and retracting its landing gear.

Back in February of 2016, an Iranian drone, presumably a Shahed 129, was seen with what appeared to be a missile similar to what has been seen in Iranian state media.

Several Shahed 129s made an appearance in Syria’s civil war again in 2017, two of which were shot down by American F-15Es. One of the drones was apparently able to drop ordinance on or near Syrian fighters before it was shot down.

In 2016, an Iranian Revolutionary Guard Corps (IRGC) Air Force commander implied that Iran was in the process of upgrading its drone fleet in order to end its reliance on ground-based controllers towards a satellite-based system. This may be the reason for the nose bulges seen in the newer model Shahad 129s.

If claims about GPS-navigable Shahed 129s are credible, then Iran presumably has the ability to use GPS navigation in tandem with other weapons systems, namely ballistic weapons.

If true, this lessens the technological military advantage of both regional adversaries (Israel) and those of the United States. This tech could be exported to Iran’s regional allies like Hezbollah in Lebanon, Yemen, or indeed to Syria, where this has presumably already happened.