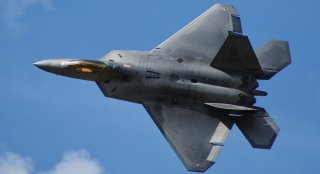 With the U.S. Air Force’s fast-emerging sixth-generation stealth fighter continuing to inspire international interest and the F-35 Joint Strike Fighter’s global customer base rapidly expanding, it is all too easy to forget about the world’s best air-to-air fighter: the F-22 Raptor. But this would be a mistake.

In fact, even with the highly secretive sixth-generation aircraft already airborne and large numbers of F-35 stealth fighters showing up on NATO’s eastern flank, the Defense Department is sending twelve Air Force F-22 Raptors to support NATO Allied Air Command at the 32nd Tactical Air Base in Lask, Poland, according to an Air Force report.

Air policing will be the F-22’s primary mission, the service report says, adding that the aircraft will be moving to Europe from Joint Base Elmendorf-Richardson in Alaska. The F-22 has certainly established its ability to deploy in recent years, particularly in light of the Air Force’s Rapid Raptor program. The Rapid Raptor program, focused on speed, maintenance, readiness, and deployability, stipulates that F-22 stealth fighters must retain the ability to deploy anywhere in the world within twenty-four hours. The program prepares four F-22s and crew members with C-17 Globemaster III cargo aircraft that can provide support, fuel, and weapons with the specific purpose of enabling a “first-strike” capability in remote or austere places around the world.

This modernization approach, firmly oriented toward sustained readiness for combat, has been in place with the F-22 for many years now. Several years back, the Air Force and Lockheed Martin put a fleet-wide F-22 upgrade in place called 3.2B which added new software to several of its cutting-edge weapons systems. The idea, as explained by senior Air Force weapons developers, is to enable a continuous and ongoing “stream” of upgrades and avoid having to wait for software “blocks” or “increments” which can take several years to develop.

“When it comes to software, none of the old rules apply. It is a service and a pipeline today. We have to develop software differently. With the F-22, there has been a shift from a traditional acquisition program into a continuous stream of delivery,” William Roper, former assistant secretary of the Air Force for Acquisition, Technology and Logistics, told an audience several years ago at an Air Force Association Symposium.

As part of this “agile acquisition” program focused on software, the Air Force has now fully validated two new weapons for the F-22 fighter. The technical concept is grounded upon the premise that hardware configurations, airframes, weapons racks and sensors can all be changed with upgrades with software. The two new weapons are advanced variants of existing weapons, the AIM-9X Sidewinder air-to-air missile and the AIM-120-D Advanced Medium-Range Air-to-Air Missile.

This faster-paced software-driven strategy is intended to reinforce programs like the Rapid Raptor program to ensure that deployed F-22s operate at an optimal level of lethality.