Next-Gen: The Abrams Battle Tank Could Become an Autonomous Vehicle 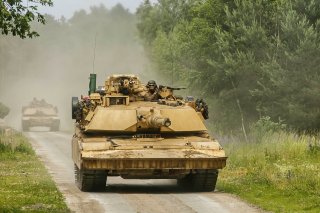 The Abrams tank will continue to play a major role in supporting advancing infantry and bringing heavy firepower to armored confrontations.

That is the view of senior U.S. Army futurists and weapons developers, who are now pursuing a dual-pronged path involving efforts to upgrade the Abrams tank and explore the possibility of building lighter, faster, and more expeditionary armored platforms.

“I do still think you need something that does what a tank does on the battlefield,” Douglas Bush, assistant secretary of the U.S. Army for acquisition, logistics, and technology, told the National Interest in an interview.

Some of the cutting-edge efforts involve the rapid development of unmanned systems and robotic vehicles, allowing the U.S. Army to operate in dangerous forward positions without placing soldiers at risk. Other work involves the maturation and ongoing testing of lighter composite materials intended to provide Abrams-like protections. There are also ways to continue upgrading the Abrams tank by blending composite materials with traditional heavy armor. Bush explained that ongoing innovations are shaping new approaches to mechanized warfare and driving a need for new equipment. At the same time, he also stressed that there will continue to be an indispensable role for the Abrams tank in the coming years.

“Now in the future, it might be that some robots work with manned platforms perhaps. But in the near term, certainly near to midterm, I think the heavy tank still has a role in successful combined arms warfare, because ultimately, it's about achieving the objectives. Infantry still needs fire support, you still need something that can cover ground quickly and hold it, you still need something heavily protected that can take damage from, the continuing growing threats of anti tank weapons from across the board. So I think there's still a role,” Bush said.

There may be a point where an autonomous or semi-autonomous tank-like robotic vehicle can perform many of the operational tasks associated with tanks. Yet, these kinds of developments are likely to rely upon continued command and control from human decision-makers. Nonetheless, forward operating armored vehicles able to perform an increasing range of functions autonomously, while under enemy fire, certainly improve survivability and add new dimensions to combined arms maneuver.