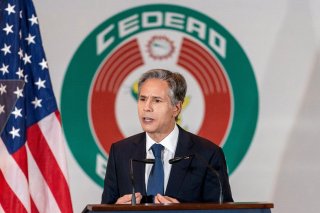 Nigeria is at an inflection point. Facing the worst wave of insecurity in twenty years, a five-year trend of democratic backsliding, and falling public confidence in governance and elections, and with next year’s election set to be the first open seat presidential election since 2007, the stakes are high for both Nigerians and the greater Sahel. As the United States launches its new Africa Strategy, are we prepared to do what it takes to support Nigeria at this critical time for its democracy?

Whereas previous strategies prioritized security, trade, and development over democratization—a false tradeoff that results in poor governance and increased conflict—the new strategy emphasizes the importance of open societies and democratization. This new approach is certainly ambitious but its implementation remains an open question. The 2023 elections in Nigeria may be its first big test.

While Nigeria’s 2019 elections failed to meet domestic or international expectations, there is some reason to hope for significant improvements in 2023. The 2022 Electoral Act includes many critical reforms and enjoys widespread support among Nigerian and international stakeholders, and the Ekiti and Osun gubernatorial elections, held earlier this summer were generally fair and peaceful—demonstrating the positive impact of these reforms.

However, the enforcement and implementation of the new election law has been uneven and inconsistent. The Ekiti and Osun gubernatorial elections were plagued by vote buying, with little visible enforcement by authorities. Major political parties continue to violate campaign finance laws and filing deadlines with few repercussions, and the Independent National Electoral Commission (INEC) has yet to be fully funded, raising questions about its ability to meet the significant logistical challenges the 2023 election will pose. The continuous voter registration process was suspended on July 31, threatening to disenfranchise many Nigerians—especially young people— who are just starting to become interested in the election. If these issues are not addressed in a timely fashion, there could be serious risks to the integrity of the 2023 elections.

The U.S. government has a compelling interest in ensuring that the Nigerian people are able to exercise their right to vote in free and fair elections. There are several key areas where the new U.S. strategy should be leveraged to support Nigeria’s path to democratization.

First, the United States should work to ensure that Nigeria publicizes and acts on the commitments made at last year’s Summit for Democracy. So far, just seven of seventeen participants from sub-Saharan Africa have publicized their commitments, raising questions about whether the summit enables countries to engage in “democracy washing” rather than promoting real reforms. The United States should leverage other high-profile fora such as the December 2022 African Leaders Summit to push for firm and visible democratic commitments.

The Biden administration should also engage with the Nigerian government to push for steps needed to ensure the 2023 elections are free, fair, inclusive, and peaceful. Domestic civil society organizations and international non-governmental organizations have detailed specific and critical actions that must be taken to ensure these elections are successful. These recommendations touch on critical areas including election administration, civic participation, judicial matters, political party conduct, and electoral security. The United States should fully back these recommendations and elevate the voices of civil society and independent experts in its bilateral engagements with the Nigerian government.

The United States should also actively engage with its Nigerian counterparts on the thorny but critical issues of equity and inclusion. Obstacles to religious freedom and the inclusion of women and youth require significant attention. While U.S. diplomats may prefer to address such sensitive issues in quiet bilateral meetings, the lack of visible engagement creates the impression that America is not invested in these issues and may allow conditions to deteriorate with little international notice or accountability.

As Secretary of State Antony Blinken emphasized on his recent trip to Africa, the United States must continue to approach its African partners in the spirit of humility and partnership. However, this does not mean that the United States should refrain from using its leverage and influence to ensure that the people of Nigeria (and Sub-Saharan Africa more broadly) have legitimate and accountable governance. At a time when conflict has reached historical highs and democracy is under threat on the continent, the United States cannot afford to be muted in its advocacy for democracy.

Democratization is a difficult and lengthy process—one that requires a deliberate focus on democratizing countries and their allies, and one where the United States has a key role to play. As President Joe Biden noted, “Democracy doesn’t happen by accident. We have to defend it, fight for it, strengthen it, renew it.” The new Africa strategy puts the freedom and aspirations of African people front and center, bringing clarity to an area of U.S. diplomacy that has often been muddled. But will action follow words? The people of Nigeria—and Africa—are waiting to find out.

Santiago Stocker is the Resident Program Director for Nigeria at the International Republican Institute.