NMESIS: Don’t Get in the Way of the Marines’ New Ship-Killing Missile 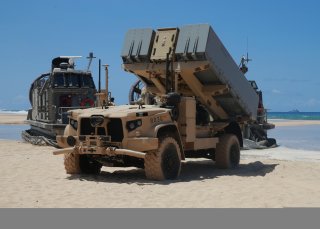 The LAW is a mobile, littoral, amphibious warfare-oriented attack and transport system for Marines and weapons systems, a platform that will be of particular value should there be a need to set up land-fired weapons on islands or coastal areas as part of a maritime operation.

NMESIS represents the growing extent to which the Navy and Marine Corps are continuing to find new uses and potential adaptations for its Naval Strike Missile (NSM), which initially armed the Littoral Combat Ship. The Corps is doing this to widen the mission envelope to encompass a greater sphere of attack possibilities, including amphibious attacks, varied maritime attacks, and even mobile, ground-based anti-ship missile fires.

The NSM, a Raytheon-Kongsberg weapon that has been in development for many years, provides the LCS with an over-the-horizon attack option, which gives commanders the ability to track and destroy incoming anti-ship missiles at safer ranges.

Additional uses for the weapon include the engineering of new variants that can fire from land in order to destroy anti-ship missiles from different vantage points. Further adaptations include the wider distribution across the Navy fleet and the potential inclusion of various s kinds of electronic enhancements or software upgrades to improve guidance, reliability, or range.

The concept behind the NMESIS and LAW is to enable the unprecedented ability to quickly transport land-fired anti-ship missiles from ship to shore in support of amphibious attacks. A more shallow-draft LAW can reach littoral waters, ports, and coastal areas that are inaccessible to deeper draft warships. The idea is to integrate quickly deployable, mobile weapons systems without having to pre-stage a difficult-to-reach forward staging area.