No, Congress Should Not Sanction Libya's Khalifa Haftar 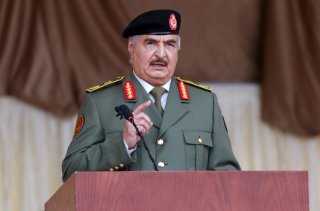 In a recent op-ed for the National Interest, Sasha Toperich and Debra Cagan of the Transatlantic Leadership Network argued that Congress should sanction Khalifa Haftar. They claimed that Haftar, the self-appointed warlord leader of the Libyan National Army, “is the largest obstacle preventing his country from moving forward.” That Haftar stands in the way of the upcoming Libyan elections isn’t wrong, but sanctioning him would be both futile and untimely.

To start, in their article Toperich and Cagan discuss Russia’s support for Haftar through billions of Libyan counterfeit dollars, a venture that has destabilized an already fragmented Libyan economy. If Congress were to impose sanctions, it would likely be futile, as Haftar can seek funding, not just from Russia, but other countries like Egypt, the United Arab Emirates, and Saudi Arabia that haven’t shied from propping up what they see as a friendly regime. That funding would not be enough to keep Haftar fighting a forever war, but it will be enough to keep him afloat until the December elections.

Sanctions would also work best if the Libyan banking system were a unified one. Companies are divided between the eastern and western regions, each claiming differing legitimacy, which raises further questions as to how these differences would be absorbed into national accounts. We’ve already seen something similar play out in Afghanistan. The U.S. Department of Treasury’s method of imposing sanctions through the global financial system proved limited precisely because Afghanistan’s economy excludes those institutions and relies on local transactions. While the Libya and Afghanistan situations aren’t a perfect mirror, the case of Afghanistan shows the challenges of implementing sanctions effectively on weak economic systems like Libya.

And what about the Libyan people themselves? Ordinary Libyans are struggling to carry out basic transactions or transfer their money between banks. In regard to this fragmented economy, one prominent businessman remarked that “The harm has reached everyone.” In an interview I conducted with Manisha Singh, former Acting Undersecretary of State and Assistant Secretary of State for Economic Affairs, she emphasized that sanctions are primarily a tool to enable the people to be in charge of their country. And there’s no doubt that sanctions do sometimes help with removing dictators or creating popular uprisings. Singh argues, for instance, that U.S. sanctions have partly allowed the Cuban people to protest the communist regime a few months ago. But Daniel Drezner, a professor at Tufts University, wrote in Foreign Affairs that “the literature on sanctions is unanimous on the harm these measures inflict on populations in targeted countries.” It is not clear yet that the Biden administration or Congress can walk this tightrope between targeting Haftar’s regime and supporting the Libyan people.

Sanctions on Libya would also be untimely. The United States is currently trying to reach an agreement as “the moment is urgent.” With elections only three months away, imposing sanctions now would threaten the stability of any deal because it is time to bring it to a close, not derail it with hurried, limited sanctions. Even the European Union understood this last year: it lifted sanctions on Aguila Saleh, a supporter of Khalifa Haftar, to bring both sides to the middle.

To be sure, lifting sanctions entirely is likely to not be the right idea either. But imposing sanctions could both backfire on the Libyan people and fuel foreign actors to increase funding to Haftar. With the election so close, new policies like sanctions will be rushed without appropriate considerations. Toperich and Cagan’s assessment that “Haftar is no friend of the United States,” is correct, but their policy approach is not.

Sam Abodo is an undergraduate student at Carnegie Mellon University’s Institute for Politics and Strategy and an editorial intern with The National Interest.