No Iwo Jima: The Marines' Plans For Amphibious Assaults Are Changing 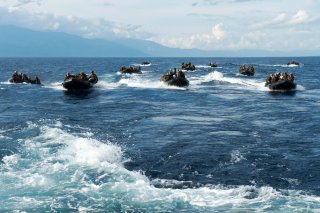 Future amphibious assaults will most likely look nothing like the famous World War II Iwo Jima attack, which was largely linear, straight ahead, and led by thousands of committed Marines willing to absorb enemy fire to take the beachhead.

Now, the advent of autonomy, AI-enabled unmanned systems, long-range sensors, and weapons, not to mention 5th-Generation close air support, have radically altered the strategic equation regarding how amphibious warfare would likely be conducted. Dispersed, yet closely networked fleets would consist of a mix of armed platforms to include surface ships with “over-the-horizon” missiles, ship-to-shore connectors loaded with Abrams tanks, undersea, aerial, and surface drones. These drones would conduct reconnaissance looking for weak or less defended points along the enemy coastline while V-22 Osprey military aircraft and even amphibious-launched F-35B fighter jets supported the approach. AI-enabled large and small, surface and undersea drones will coordinate operations, share pressing target information and even conduct high-risk attacks while Marines and sailors perform command and control at safer standoff regions.

At the risk of oversimplifying, future amphibious warfare will not only rely heavily upon unmanned systems and a new generation of air support but also one simple word. Range. This is critical from both an offensive and defensive standpoint, meaning amphibious attacks will need to be conducted with the understanding that advanced enemies operate extremely accurate and precise long-range weapons, sensors, and guidance systems.

These dynamics and combat variables are likely part of the conceptual inspiration for why the Marine Corps recently shot off the Raytheon-built Naval Strike Missile from land-based vehicles, introducing an innovative and as of yet unprecedented adaptation of a ship-launched “over-the-horizon” weapon now arming Littoral Combat Ships and planned for the Navy’s new Constellation-class Frigate.

“The Marines are making this cultural shift to sea denial and sea control. one of the common priorities,” Randy Kempton, NSM & Tomahawk Program Director, told The National Interest in an interview.

The Marine Corps GBASM will be a disaggregated, multi-domain mix of combat tactics and variables to include advanced maritime, air, and land-based operations, including an ability for newer kinds of land-sea “island-hopping” amphibious attack. In these circumstances, Marines and even heavy weapons transport will transition quickly from sea to shore and back. Weapon systems primarily thought of as surface fire are now being configured as mobile, adaptable attack platforms able to transport from ships to land-firing locations and back, depending upon threats and mission requirements.