No Laser for You: The Pentagon Wants to Destroy the Laser Weapons of Its Enemies 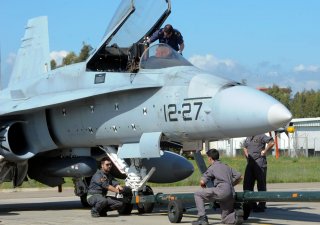 Key point: Everyone wants lasers but how will countries counter these new weapons? In the case of America, DARPA is already on the case with anti-laser solutions.

As militaries around the world race to develop powerful combat lasers, the Pentagon has something else in mind.

It wants to destroy those lasers.

The U.S. military worries that high energy lasers (appropriately known as HEL) weapons can destroy or damage surveillance satellites, sensors, aircraft and vehicles, or injure personnel. Despite challenges such as generating sufficient electrical power, the era of the combat laser is coming soon. The U.S. and German navies are developing laser cannon for their warships, Russia might mount a laser gun for its next-generation jet fighter, and the U.S. Army wants to deploy laser-armed Stryker armored vehicles by 2022.

The advent of combat lasers “has been driven by demand for industrial cutting machines and high-bandwidth, long-range telecommunications,” notes the research announcement by DARPA, the Pentagon’s pet research agency. “These same laser materials and devices can also be used by directed energy weapons for both destructive and deteriorating effects (such as temporary blinding or degrading electro-optical/infrared (EO/IR) sensors). Adversary HEL weapons can rapidly detect, track, engage, and achieve near-instantaneous effects to degrade or destroy U.S. and allied targets. Furthermore, the reduced size, weight and power (SWAP) of HEL weapons enable highly mobile systems.”

But if there is one rule of warfare, it’s that every weapon eventually meets a counter-weapon. Bomber, meet fighter. Tank, meet anti-tank missile. And high energy laser, meet the Counter-High Energy Laser Weapon (C-HELW).

“A potential goal of a future program is the demonstration of HEL-hardened systems that: (1) can quickly detect a high-energy laser weapon attack in tactical scenarios, (2) geo-locate the source (on- and off-axis), and (3) rapidly disrupt attack,” according to the project announcement. “Specifically, DARPA is seeking to prove the feasibility and potential value of technologies that could enable an integrated system that can conduct all three of the above functions.”

Ideally, the C-HELW would be able to detect and disrupt high energy lasers—including both mobile and fixed weapons—before they can fire. Interestingly, DARPA also wants hardened “platforms and munitions to allow a kinetic attack on HEL systems.” This suggests missiles and bombs – and the manned aircraft and drones that carry them—capable of surviving laser fire long enough to destroy a high-energy weapon.

DARPA lists one challenge to the project as being “off-axis detection of scattered laser irradiation at long standoff distances, particularly methods to detect weak scattering above high ambient light conditions.” This indicates that one way to detect HEL weapons at long range is by the diffuse light they give off, assuming it can be spotted against background lighting conditions.

DARPA acknowledges other challenges to C-HEL, including:

- Rapid onboard processing to geo-locate, target, and track the source in real-time

- Disrupting the HEL kill chain within milliseconds of an attack

- Material solutions that protect against HEL attack and enable completion of the mission, including Counter High Energy Laser missions, during such an attack

- Determining point at which HEL weapon attack has been successfully disrupted

That there was going to be a laser versus counter-laser duel was inevitable. But this is also a race that is likely to continue as technology makes laser weapons ever more practicable.

Michael Peck is a contributing writer for the National Interest. He can be found on Twitter and Facebook. This first appeared earlier in 2019.