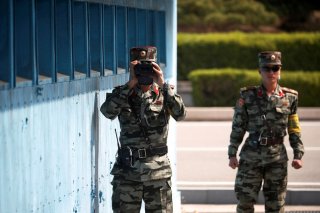 VX is one of the deadliest nerve agents ever discovered, and North Korea may have significant stockpiles near the North-South DMZ.

Behind the United States and Russia, North Korea is thought to possess one of the world’s largest stockpiles of chemical weapons, with a robust domestic industry largely capable of producing most chemical weapons in-country.

While many highly toxic chemicals can be considered “chemical weapons,” North Korea is thought to prioritize both Sarin and VX. One VX definition states that “The most toxic of the V-series nerve agents, VX was developed after the discovery of VE in the United Kingdom. Like other nerve agents, VX causes uncontrollable nerve excitation and muscle excitation. Ultimately, VX victims suffer death by suffocation. VX is an oily, amber-colored, odorless liquid.”

VX, known as venomous agent X, is particularly dangerous and fatal if inhaled or absorbed through the skin. Minimal amounts of VX can kill—minute quantities are sufficient to kill a healthy adult. As a result, it is considered a weapon of mass destruction by the United Nations.

VX is incredibly fast-acting and induces broad, muscular paralysis thanks to a muscular blockade, essentially interfering with the brain’s ability to control muscle tissue. As a result, death is caused by asphyxiation, as the body loses the ability to control the diaphragm and work the lungs.

Perhaps one of the most prominent and bizarre VX incidents took place at the Kuala Lumpur international airport in 2017, when Kim Jong-nam, the half-brother of Kim Jung-un, died following exposure to the VX chemical.

During that incident, two women assaulted Kim Jong-nam, smearing VX on his face. The women believed they were part of a prank being filmed for television and were unaware that they had handled a toxic substance.

Incredibly, reports indicated that Kim Jong-nam carried about a dozen doses of atropine, an antidote to VX. However, it is unclear if he tried to administer the drug to himself. He later died in a Malaysian hospital.

The South Korean Ministry of Defense claims that around seventy percent of North Korean ground forces, many thousands of long-range artillery pieces, and ballistic missiles are located near the Demilitarized Zone dividing the two Koreas. This is of particular concern to some of South Korea’s most densely populated areas, which are not far from the DMZ, and could be extremely vulnerable to chemical attacks.

International security experts have raised the alarm that North Korea may be motivated in the future to sell VX or other chemical weapons abroad, especially as American-led economic sanctions hobble the North Korean economy. In total, North Korea may possess as much as 2,500 to 5,000 tons of VX.