North Korea Negotiations: A Prelude to More Fire and Fury? 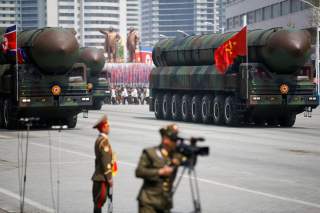 Mere weeks after President Trump declared the North Korean nuclear threat over, a clash between the United States and North Korea by the end of Trump administration seems increasingly plausible.

A common view among foreign policy and arms control analysts is that President Trump has been naive about Kim’s willingness to dismantle his nuclear missile program and that the Kim regime has outmaneuvered, outsmarted, and duped the Trump administration.

To agree with this analysis, one has to look only to select statements and completely ignore others that show the contrary.

Those who insist that the Trump team has been duped point to state the State Department spokesman said the United States is "in a good spot" today with North Korea as Secretary of State Pompeo headed off to Pyongyang for additional talks. Recall the president’s media interviews directly following the Singapore Summit when he boasted of the indisputably weak four-point “agreement” between President Trump and Kim Jong-Un. Only one point even mentioned “denuclearization” a term that is practically meaningless without further specificity. And when President Trump declined to condemn North Korea’s abhorrent human rights record and deflected blame regarding “Chairman Kim’s” culpability.

Despite the document’s absence of details, secretary of State Pompeo has repeated with some frequency that “Chairman Kim” agreed to final “fully verified” denuclearization. Even the long-time North Korea hawk, Ambassador Bolton, has left open the possibility that Kim may make the strategic decision to dismantle. Without public evidence to support such claims, it all seems like wishful thinking.

But there are other statements. Right before the summit, President Trump said that if the North Koreans didn’t make a deal to dismantle their nuclear program, they could be decimated “like Libya.” He and his officials have repeatedly said that North Korea, although agreeing to “dismantlement” generally, have not really “made a deal;” or, as Secretary Pompeo has said, they have not made the “strategic decision” to move in another direction. President Trump himself told reporters this month that’s possible negotiations could fall apart. The Trump administration, even as it has struck a very optimistic tone since the summit, has long hedged about the possibility of achieving the United States’ ultimate objective, which is the complete, verifiable, irreversible, dismantlement (CVID) of North Korea’s nuclear missile program.

Even more problematic, those who contend the Trump team has been duped are judging the president against the expected behavior of other U.S. presidents.

Previous presidents were unwilling to “normalize” the North Korean regime by refusing to say anything positive about the regime until that distant day when it abandons its nuclear program and respects the dignity of its people. Indeed, an unofficial rule that has restricted the statements of American presidents about state leaders is to say nice things about allies and criticize enemies. So, the logic goes, President Trump’s positive remarks about the summit and Kim must mean he believes Kim is a trustworthy, reasonable negotiating partner. But President Trump does not follow this rule.

There is little permanency, if any, to whom, on any given issue, he praises or condemns, as these things can be fluid and nothing sacrosanct. He will say what must be said, to his mind, to build up egos and to crush them in the course of forcing his counterpart to bend to his will. He employs insults or flattery as weapons and can change from one to the other even against the same person in a single week.

Critics will say doing so reveals the president’s lack of moral compass, or at least lack of shame. Supporters will say operating this way reveals his gutsy, stone-cold pragmatism.

While the president’s flattery of Kim makes many Americans uncomfortable, keen observers will recall that just a few months ago, at the height of the “maximum pressure” campaign, the president had this to say about the North Korean regime:

“But no regime has oppressed its own citizens more totally or brutally than the cruel dictatorship in North Korea… I will not repeat the mistakes of past administrations that got us into this dangerous position. We need only look at the depraved character of the North Korean regime to understand the nature of the nuclear threat it could pose to America and our allies.”

President Trump’s team is made up of some of the most well-known North Korea hawks, including Ambassador Bolton filling the role of national security adviser. Kim has not duped this team. It is the nature of the Kim regime along with a suspect arsenal of nuclear weapons garnering the President’s attention. The president is not confused about what was in the vague agreement the two leaders signed. He is a businessman, and there is scant chance the president would sign a document like the one he signed in Singapore if he was seeking a binding business deal with profits on the line.

To the president, the Singapore agreement is nothing more than notional, and an element of a marketing campaign, not the close of a deal. What is unfolding before us is President Trump’s coordinated hard-sell marketing campaign targeting Kim Jong-un. A “hard-sell” entails aggressive appeals to the potential buyer’s greed, vanity, or fears. The salesperson is hyperbolic, effusive in flattery, and often places alternatives to a deal in dire terms to force the potential buyer to make a decision.

It is why officials have publicly declined to comment on details of the U.S.-North Korea denuclearization plan and regularly note that the North Korea leader is surely “watching” their statements. They are getting out of the way of the salesperson-in-chief’s strategy.

When the president makes his declarations of peace and pronouncements of Kim’s positive leadership qualities, his target audience is not the media class or the commentariat of arms control experts. It is Kim himself.

In his meeting with Kim, President Trump showed a video that advertises a prosperous North Korean future, with a booming narrator who proclaims that Kim could be the ultimate hero for his people. Then the video presents Kim with an alternative future: missiles raining down on his country, isolation, and misery. This video kicked off the hard-sell marketing campaign.

But the time given to the “customer” Kim to make his choice is limited.

Recently Ambassador Bolton told CBS News, “And we have developed a program. I'm sure that Secretary of State Mike Pompeo will be discussing with the North Koreans in the near future about really how to dismantle all of their WMD and ballistic missile programs in a year.”

A year. Which means Kim has a few more months to accept President Trump’s prosperity offer so that the United States can begin dismantlement before the next U.S. presidential election. With no evidence Kim is leaning in this direction, this autumn may bring the return of “fire and fury” rhetoric, more sanctions, and possibly even fire and fury itself.

Rebeccah Heinrichs, a senior fellow at the Hudson Institute, is an expert in nuclear deterrence and missile defense. You can follow Rebeccah on Twitter at @RLHeinrichs