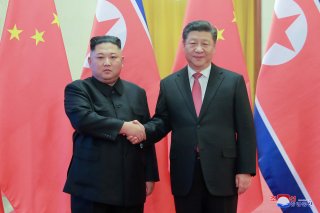 Choe Ryong Hae, a leading official in the Workers’ Party of Korea, passed on Kim’s remarks to Li–indicating that he had “highly praised the ambassador for successfully assisting several DPRK-China summit meetings over the past seven years, making much effort to develop the friendly relations between the two parties and the two countries.”

The North Korean leader believed that the two nations’ relationship had entered a “fresh heyday,” according to Choe’s statement. In turn, Li expressed his thanks to Kim, and noted his pride in North Korea’s “progress in all fields of socialist construction,” according to the KCNA.

Li is a career diplomat in China’s foreign ministry. He has served as ambassador to North Korea since 2015. Prior to his assignment in Pyongyang, he had represented Chinese interests in Myanmar and the Philippines. He is noteworthy for remaining in North Korea even after most foreign embassies in the country’s capital closed down, and severe social restrictions were imposed on its residents due to the coronavirus pandemic.

China and North Korea have maintained a largely amicable strategic partnership since 1961. That year the two countries first signed a Treaty on Friendship, Cooperation, and Mutual Assistance, which is the only defense treaty that either nation currently has on the books. Although China has expressed frustrations about North Korea’s pursuit of nuclear weapons and ballistic missiles, it has largely continued to support the country, while North Korea has grown steadily more dependent on China for trade as U.S. and Western sanctions have mounted.

In 2018, Kim sought to mend ties with Chinese President Xi Jinping, making his first international trip to Beijing in order to meet with the Chinese leader. Xi returned the favor by visiting Pyongyang in June 2019, the first Chinese leader to do so since Hu Jintao in 2005, and the first since North Korea detonated its first nuclear device in 2006. China had been a party to the Six-Party Talks aimed at preventing North Korean nuclearization since 2003 and was embarrassed by the talks’ failure. As a result, relations between the two countries had suffered until Kim’s 2018 outreach.