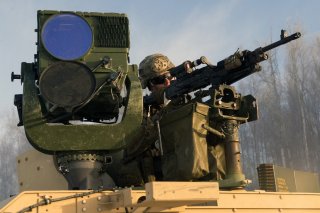 Northrop Grumman, an Army defense industry partner, recently fired off proximity rounds from a 30mm cannon during a live-fire demonstration at a Bushmaster Users Conference in Arizona. During the event, a Ford 250 pickup truck mounted with a 30mm chain gun fired proximity rounds at targets in the desert.

Northrop Grumman Developers describe the proximity round as having an optimal “fire control solution” for destroying drones. The rounds travel through the air with a built-in sensor and can “explode” in the direct vicinity of targets nearby at the optimal point in its trajectory

“As soon as the round is fired, the radar on the front of the bullet opens its eyes, and it flies until it sees something. The radar tells the round if the target has moved back a little bit or if it’s moving forward so it can initiate more precisely,” Rob Menti, director of Business Development for Northrop Grumman, told The National Interest during a Bushmaster demo.

Airburst rounds, while perhaps less impactful against drone swarms, can also be extremely effective. They often use a laser rangefinder to discern the exact distance of an enemy target in “defilade” and explode right near or just above a specific enemy target. An Army scientist once explained that algorithms can calculate the exact distance since the speed of light is a “known” fixed entity and the time of travel to a specific target can be determined. Therefore, a round can be pre-programmed to explode, for example, over a group of rocks hiding enemy fighters. While they might be less effective against fast-moving targets, airburst rounds offer specific and highly impactful attack options against otherwise unreachable fixed enemy positions.

For these reasons, Coffman was clear that both kinds of attack rounds will continue to be developed for 30mm and 50mm cannons, among others.

“The technology is now there that you could go in either of those directions across that caliber suite. So it will be interesting to see where ultimately our technical community makes recommendations about where we should be,” Maj. Gen. Ross Coffman, director of Army Futures Command’s Next Generation Combat Vehicles Cross-Functional Team, told The National Interest.

A reason for the rapid maturation of this kind of counter-air targeting may be due to the fast maturation of artificial intelligence-enabled (AI) targeting technologies. The Army, for instance, is currently seeing breakthrough successes at experiments like Project Convergence using AI-empowered computer systems to quickly analyze gathered sensor information; perform near-real-time analytics to discern target specifics; and bounce information off of a vast, compiled database to determine optimal “shooters,” “effectors,” or countermeasures for a specific attack scenario. Sensor to shooter time, using emerging AI-capable systems such as the Army’s FireStorm, are reducing the sensor-to-shooter time from minutes down to seconds.

AI can even compare incoming sensors specifics across a seemingly limitless database of historical instances and tactical scenarios to help determine, for example, if a drone swarm would be countered by electronic warfare (EW) capabilities, a laser, or explosive “kinetic” solution. Should a drone swarm be attacked over an urban area, for instance, a laser or EW “non-kinetic” solution might be preferred to minimize explosive fragmentation and potential collateral damage. Other circumstances might require a proximity round or drone-on-drone kind of explosive interceptor.

These kinds of key computer-enabled discernments were being assessed during the Bushmaster Users conference which combined proximity rounds and integrated fire-control with armored vehicle-mounted cannons.

“If a decision is made that you don’t want to engage [a target] with a kinetic means, we can immediately turn on our jammer that is integrated. While AESA [active electronically scanned array] is moving, the system also has a passive RF [radio frequency] detection capability. We have both passive and active sensors on the platform,” Menti said.