Not Enough Subs: Why America Can't Churn out New Boats for the Navy Fast Enough 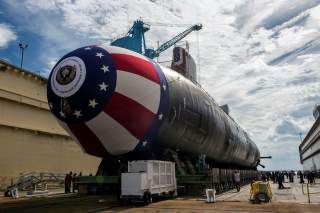 Key point: America doesn't have as many shipyards left and they can't build new vessels fast enough. Can this situation be turned around?

A debate is raging in U.S. naval circles over the missions the Navy should assign to its Virginia-class attack submarines.

But now problems at America’s shipyards somewhat have rendered the debate moot.

The news broke on Nov. 5, 2019 that the Navy will sign a contract with shipbuilders Newport News and Electric Boat for just nine new “Block V” Virginias, with an option for an additional boat. That’s down from 11 that the fleet expected to order.

The contract still could be worth around $20 billion.

The smaller order reflects a hard reality. Shipyards have struggled to keep up with demand for submarines. Simply piling orders on top of delayed orders won’t result in the fleet getting more subs.

The order-reduction “is the latest jolt to the Virginia-class program that has seen creeping delays and slipping profits in recent years caused by labor issues and a strained submarine industrial supply base,” Defense News reported. “The contract was originally intended to be signed by October 2018, at the start of fiscal 2019, according to Navy budget documents.”

The Navy’s efforts to ramp up production of its Virginia-class attack boats ahead of the start of its massive Columbia ballistic-missile-submarine program have encountered myriad issues and delays. The most recent Virginia-class boat, the Delaware, was delivered by Huntington Ingalls Industries’ shipyard in Newport News, Virginia, nearly nine months behind schedule, later than the four- to seven-month delays the Navy predicted earlier in the year.

Delays coupled with a high-profile quality issue with missile tubes destined for the Virginia Payload Module, the Columbia and the U.K.'s new class of ballistic-missile submarine led to a shakeup inside General Dynamics Electric Boat.

The company experienced a change in leadership at its Marine Systems division after the top official there retired, and the firm and ousted Electric Boat President Jeffrey Geiger after years of mounting frustration between the Navy and the company.

The Navy had been counting on a big order of Block V Virginias to help mitigate a steep decline in submarine force levels. In December 2016, the Navy announced it needed 66 attack boats to meet regional commanders' needs. But the attack-sub force could decline to a low of 42 in 2028 as old Los Angeles and Ohio-class SSGNs boats, their nuclear reactors worn out, leave the fleet in large numbers.

The loss of the SSGNs could be particularly damaging. These four boats, each packing 154 missile tubes, together account for 600 of the fleet’s roughly 6,000 Mark 41 launchers that fire Tomahawk cruise missiles.

The Block V boats are supposed to partially replace the SSGNs. Under the terms of the new contract, eight of the Block Vs will have extra missile tubes to boost each boat’s Tomahawk load from 12 missiles to 40.

But experts told Defense News the Navy shouldn’t continue relying on the submarine fleet for such a large proportion of its cruise-missile capacity. But it’s a waste to equip the new submarines for land-attack missions.

“That’s changing now,” said Bryan Clark, a retired submariner and fellow at the Center for Strategic and Budgetary Assessments in Washington, D.C.

“These countries are investing in their own anti-submarine warfare systems. China has put a lot of money into ASW systems, they are installing surveillance systems akin to our SOSUS [sound surveillance system]. So the idea that our submarines are our go-to asset to gain access, that may not be true in the next few years as it was in the past 10, so there is a question as to whether we should be investing in submarines to maintain the undersea strike capacity.”

The inability of shipbuilders to build submarines as fast as the Navy wants them in part answers the question regarding the right roles for subs in an era of great-power competition. If the yards can’t build the boats, the Navy won’t have any choice but to look elsewhere for cruise-missile carriers.