Not Good: China Can Make Robot Warships Too 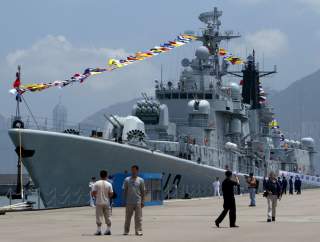 Key point: America is building drone ships for its navy. So China figured "whatever you can do, I can do better."

A Chinese company has revealed a design for a small robotic warship that could compete with unmanned warships the United States is developing.

China Shipbuilding and Offshore International Company at the IDEX-2019 trade show in Abu Dhabi showed off a model of an armed, crewless boat.

"According to the product video, the drone appears to be modular and reconfigurable for the different mission areas, but it’s unclear what missions are permanently integrated into the system. In the video, JARI is shown alternately shooting down an aerial drone, sinking a submarine, machine-gunning a RHIB full of adversaries trying to steal it (after firing warning shots) and sinking a surface ship that looked a little like a littoral combat ship."

It's unclear how autonomous JARI is and where human operators are in its control system.

JARI made its public debut as the U.S. Navy was getting ready to begin developing its own robotic warships. The Navy has done "a lot of work ... over the last six or seven months" preparing to formalize programs for large, remotely-operated vessels, Rear Adm. William Galinis, the Navy's executive for surface ships, said in January 2019.

The programs could cover at least two types of unmanned surface vessel. One is a medium-size unmanned surface vessel around the size of the Defense Advanced Research Agency's 132-feet-long experimental Sea Hunter robot ship. The medium USVs "will act as scouts and decoys, carrying sensors and jammers," Breaking Defense reported.

"Eventually, the Navy could also use the Orca XLUUV for mine countermeasures, anti-submarine warfare, anti-surface warfare, electronic warfare and strike missions," according to the Navy.

The U.S. fleet navy wants robotic ships to help make up for a shortfall in manned vessels. In a February 2019 conversation with reporters, Adm. John Richardson, the chief of naval operations, signalled the Navy might abandon its plan to grow from 280 major warships to 350 or 355 ships.

Manufacturing and maintaining the additional ships would cost as much as $23 billion a year, according to the Congressional Research Service. For years, the Navy’s annual shipbuilding budget has been around $15 billion.

It's unclear whether the same cost pressure is driving China's own work on robotic warships. The People's Liberation Army Navy by 2020 will possess between 313 and 342 warships, the U.S. Office of Naval Intelligence estimated.

But the PLAN accounts for only a fraction of China's maritime power, according to Andrew Erickson, a professor at the U.S. Naval War College. Beside the PLAN, Beijing's maritime organizations include the Chinese Coast Guard and the People’s Armed Forces Maritime Militia.

All together, the Chinese fleets operate no fewer than 650 ships with military missions. Add the U.S. Navy's ships to those of Military Sealift Command and the U.S. Coast Guard and you get 645 vessels.

In other words, the U.S. and Chinese fleets are roughly the same size, in terms of hulls. But U.S. interests are global while China's are regional, Erickson explained. "U.S. Coast Guard cutters are focused near American waters, far from any international disputes, while the U.S. Navy is dispersed globally, with many ships separated from maritime East Asia by responsibilities, geography and time."

"By contrast, all three major Chinese sea forces remain focused first and foremost on the contested near seas and their immediate approaches, close to China’s homeland, land-based air and missile coverage and supply lines," Erickson pointed out.

In the western Pacific, China already has advantage in ships numbers compared to the United States. If the Chinese fleet acquires large numbers of inexpensive robotic vessels, that advantage could grow.