Not Good: Will Iran and Russia's Navies Work Together? 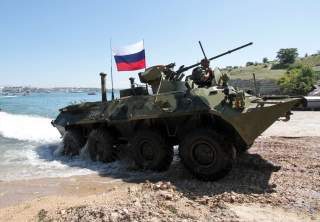 Key point: Russia and Iran both want to push back against U.S. influence in the Persian Gulf.

As military and diplomatic tensions continue to flare between Washington and Tehran, Iran is moving to reassert its presence in the Persian Gulf-- with Russian help.

Earlier this week, Rear Admiral of the Iranian Navy Hossein Khanzadi confirmed prior reports that Tehran and Moscow have signed an agreement to hold joint Naval drills: "Earlier, we signed an agreement [on joint exercises] with Russia’s Armed Forces and the Russian Fleet’s command. Soon the preparations and maneuvers’ planning will start and they will be carried out this year.”

In a different statement, Khanzadi confirmed the location: “a joint Russian-Iranian exercise is expected to be held shortly in the Indian Ocean. The exercise may also be held in the northern part of the Indian Ocean, including in the Strait of Hormuz," the naval commander said.

Khanzadi made no secret of whom these exercises are aimed against: "the situation in the Persian Gulf is absolutely calm," despite the fact that "the United States and the United Kingdom by their lies and bluff are trying to make this region look as unsafe and make it so."

The Iranian side referred to the agreement as to “the first memorandum of understanding of this kind,” one that “may be considered as a turning point in relations of Tehran in Moscow along the defense trajectory." Nevertheless, this is not the first instance of joint Russian-Iranian naval drills-- the two most recent, one in 2015 and the other in 2017, were both organized in the Caspian Sea. What distinguishes this latest round of drills is that they are partly being held in the Hormuz Strait, the site of three recent Iranian tanker seizures that have roiled the international community and provided further fuel to the fire of Tehran’s ongoing dispute with Washington.

The length and content of the drills remain undisclosed at the time of writing. The 2015 iteration focused on Iranian surface vessel combat-preparedness exercises, while the 2017 followup encompassed a broad swathe of activities from commando tactics to shore-to-sea missile drills; given the different locale and considering the developmental trajectory of the Iranian navy over the past several years, it is not unreasonable to surmise that Iran’s considerable mini-submarine force will take part in the event.

It remains to be seen if these drills, timely as they are, will inaugurate a substantive turn in the Russian-Iranian defense relationship. Whereas a decisive chunk of Iran’s current air and missile defense forces are Soviet and Russian imports, almost all of its operational navy was produced by Iran’s domestic defense industry over the past several decades. Tehran and Moscow have recently found common military cause in the Syrian Civil War, but a confluence of technical and political circumstances have made Russia loathe to export major military hardware-- in particular, the S-400 missile system and Su-30 fighters-- to Iran.

Nevertheless, the announcement coincides with the Kremlin’s recently proposed, China-endorsed, collective security scheme for the Persian Gulf, taken by some Russian political analysts as an Anti-Access/Area-Denial (A2/AD) strategy to screen out US and NATO military presence from that region.