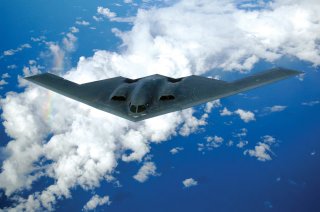 Although the U.S. Air Force B-2 Spirit strategic bomber will eventually be superseded by the upcoming B-21 Raider bomber, America’s flying branch is outfitting the world’s stealthiest bomber with new munitions to give the platform more capabilities and afford commanders greater flexibility.

An announcement by Northrop Grumman gives details on what changes are in store for the B-2 stealth bomber.

“The B-2 successfully released a Joint Air-to-Surface Standoff Missile – Extended Range (JASSM-ER) during a flight test in December. The JASSM-ER further enhances the B-2’s ability to hit any target, anywhere,” Northrop Grumman stated. “The integration of JASSM-ER enables the delivery of a low observable asset capable of traveling greater distances than its predecessor.”

But what is the JASSM-ER? Thankfully, Northrop Grumman explains in detail:

“JASSM-ER is one of three new advanced capabilities being introduced to the B-2 to further modernize the platform. The B-2 fleet, capable of delivering both conventional and nuclear ordnance, is also integrating crypto modernization and a Radar Aided Targeting System (RATS). The latest system advancements are part of integrated functional capability (IFC) P6.4, which was certified last year by the Air Force. RATS will complete the latest phase of nuclear modernization of the B-2 Spirit.”

The modernization, Northrop Grumman continues, allows the B-2 to “fully employ the B-61 mod 12 nuclear bomb. RATS is the key element of the nuclear modernization, as GPS may not be available during a bomber task force mission.”

“The unrivaled capabilities of the B-2 make it the only long range, penetrating stealth bomber currently in the U.S. arsenal,” said Shaugnessy Reynolds, vice president and B-2 program manager, in the Northrop Grumman statement.

“Committed to continued modernization of the B-2, we’re leveraging our company’s innovation in digital engineering and its decades of leadership in designing and maintaining low observable platforms to keep the B-2 Spirit mission ready.”

The Air Force B-2 bomber fleet recently deployed to Australia. 20 percent of America’s fleet was temporarily stationed down under as part of an interoperability exercise that allowed Australian forces to fly in tandem with the bombers as well as other aircraft.

The B-2 Spirit bomber is a strategic bomber very much of Cold War-era vintage, and it will soon be replaced by the B-21 Raider, an outwardly similar-looking though significantly more advanced stealth bomber. That being said, with this latest Radar Aided Targeting System upgrade, the B-2 will remain a very dangerous platform for adversaries for some time yet to come.