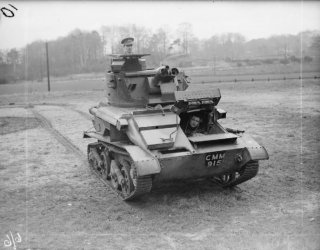 The platform that formed the basis for this Nazi self-propelled gun was a rather small, diminutive tank. Designated the Light Tank Mk VI, it was one of the British Army’s main light tanks during the years between the First and Second World Wars.

As the “Light” designation implies, the Mk VI was by no means a heavy nor even a medium-sized tank and was operated by a small three-man crew consisting of a gunner, driver, and commander who also pulled double duty as the tank’s radio operator.

The tank was quite lightly armored, though it could resist fire from most general-purpose machine guns and other small arms. For the rigors of warfare, especially in the latter half of the Second World War, the Mk VI was decidedly under gunned. It sported a single .303 Vickers medium machine gun and a single .5 inch Vickers heavy machine gun. Despite the Mk VI’s light arms and armament, the platform enjoyed success before the war as a policing vehicle for far-off British overseas possessions.

In German hands, however, the tank changed roles entirely, from light tank to self-propelled artillery gun.

After the British defeat in France in 1940, the German Wehrmacht came into possession of a vast array of British Army equipment, left behind during the British and French retreat from the continent. One enterprising German artillery commander, impressed with the Mk VI’s reliability and simplicity, realized that since the little tank’s transmission, engine, and drive controls were all located in the front of the tank, the rear would be virtually free to accommodate a howitzer, including large recoil mechanism, as well as the crew needed to operate the gun.

Surprisingly, German 10.5cm field artillery guns could be successfully mated to the Mk VI. By removing the light tank’s turret, a sufficient amount of space allowed the field gun to sit on top of the hull. German metalworkers fabricated steel shielding that fit around the gun and protected the crew from small arms fire, though the entire assembly was open-topped and insufficient to protect from artillery shells or tank fire.

In order to better handle the recoil generated by firing a field piece from atop a quite small light tank, a pair of braces deployed from the rear of the tank before firing and fixed themselves into the ground. This design successfully transferred much of the recoil forces from the chassis rear and into the ground.

In combat, German commanders recognized the modified platform’s utility as a quick-response artillery force, able to reinforce weak areas much more quickly than any towed guns were able to. As an infantry support piece, the platform excelled, though when used for direct fire or as an assault gun against fortified enemy positions or tanks, the Geschützwagen fared poorly on account of its thin armor.

Ultimately the improvised howitzer platforms proved to be too lightly armored for the rigors of armored warfare against more heavily armored tanks. Still, the little vehicles, despite their steep battlefield losses, proved their worth as rapidly deployable mobile artillery, able to fly to where they were most needed at a moment’s notice. They paved the way for purpose-built, much more heavily armed and armored German self-propelled guns like the Hummel or Wespe.

Still, the effect the odd little Geschützwagen had on modern armies is clear — take for example the American M109 Paladin or the British AS-90 or even the modern German Panzerhaubitze 2000, each of which owes at least some of their design to the original Anglo-German Geschützwagen.