Oh the Pictures: How This Russian Submarine Died Is Terrifying 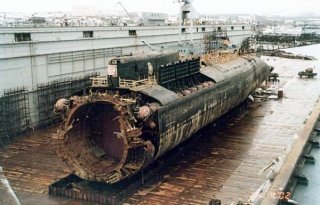 After twenty years, the Kursk disaster remains one of the darkest chapters in Russian Naval history.

A nuclear-powered cruise missile submarine, Kursk was one of the last Project 949A Antey (better known by its NATO reporting name Oscar II) submarines to be laid down. The Oscar II class is the culmination of late Soviet nuclear submarine design, purpose-built to counter U.S. aircraft carrier groups. As many as twenty Oscar-class models were planned, but only thirteen were built prior to the end of the Cold War.

Kursk entered the Northern Fleet in 1994, a time of severe budget cutbacks for the Russian Navy.  With a chronic lack of necessary maintenance work, numerous Russian submarines fell into disrepair in the years following the Soviet collapse.

Kursk was widely seen as one of the Northern Fleet’s most capable submarines, operated by a competent crew. On August 12, 2000, Kursk joined dozens of Russian vessels for the first major Naval exercise since the Soviet collapse. Kursk had just received clearance to fire several dummy torpedoes at the Petr Velikiy Kirov-class battlecruiser. After a considerable delay, two underwater explosions were heard within two minutes of one another. To the shock of everyone present at the exercise, Kursk had sunk after sustaining two back-to-back explosions. The blast devastated the front portion of the hull, as well as several of the submarine’s compartments.

Following a prolonged period of internal confusion and bureaucratic squabbling, a government inquiry concluded that one of the Kursk’s Type 65-76A torpedoes exploded due to a hydrogen peroxide leak. The blast triggered a fire that spread quickly across the submarine, contaminating several of the compartments with toxic fumes and subsequently setting off another explosion of several more torpedoes. The explosions reportedly left as little as twenty-three survivors, but these eventually perished with the lack of a timely rescue effort. The Kursk incident claimed the entire onboard crew, resulting in 118 deaths.

Subsequent investigations found numerous instances of malfeasance and procedural violations, including a disabled rescue buoy, missed inspection checks and reported mishandling of sensitive onboard equipment. The government eventually identified faulty torpedo welding as the source of the leak. It was later revealed that the dummy torpedo was in poor condition and had no business being aboard the Kursk in the first place. Faulty welding may have been the immediate cause of the explosion, but there is little question that the Kursk disaster was the net result of systemic incompetence, widespread neglect, and unacceptable maintenance spanning the decade following the Soviet collapse.

The Kursk disaster was compounded by Moscow’s bungled response. The Kremlin issued conflicting and factually dubious statements in the crucial days following the catastrophe, dragged its heels on revealing the number of victims, did not adequately communicate with the victims’ families, and inexplicably delayed its eventual decision to accept British and Norwegian help in salvaging the wreck. There is a continued debate as to what exactly went wrong, with some raising the possibility that the Kremlin was initially misled by the military over the extent of the damage and number of victims.

The Kursk disaster was not only a lesson to Moscow in crisis management, but a painful wake-up call concerning the decrepit state of too many Russian military vessels. By the early 2010s, the Defense Ministry charted an extensive modernization and procurement program to breathe much-needed new life into the Navy.