One Minute Review: Roku’s Smart Soundbar Is a Must Buy. Here’s Why. 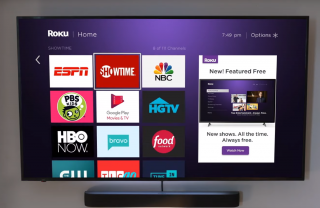 I had a chance to spend roughly eight hours or so with Roku’s new Smart Soundbar. While I initially had some doubts about how well this small unit would perform, I must say I was pleasantly surprised—floored, to be honest.

For a mere $179.95, you not only get a top-tier soundbar that connects to your TV via HDMI, but also a built-in Roku player that is among the world’s best and a great TV operating system replacement.

Here’s what you need to know—in 60 seconds flat. Bottom line: This soundbar is a winner.

Who Should Buy This: Those Who Need a Cheap Soundbar and Roku

I should start off by saying that if you are looking for $1,000 levels of sound quality or a theatre-level performer, then this is clearly not the bar for you. However, if you own or just purchased a new 4K set and want better sound than what you have—and you also want Roku—then this is the bar to get.

Setup: Simple as Simple Can Be

This was easy. First, plug in the power connector. Next, plug in an HDMI cord into your TV and connect to the bar. We connected this to my friend’s new 43-inch Q60 Samsung (read my review here, I also own and recommend it). From there, the TV picked up the Roku OS and bar right off the bat and was ready to go.

The last step was setting up a Roku account, picking apps and getting connected to the internet—again, all very easy and standard things.

Wow. For $179.95, the performance, sound quality, bass, tremble, clarity and tone were on par with the Bose Solo 5—and it has an HDMI connector, which the Solo 5 does not. For a small room and a TV set of 55-inches or less, I would surely recommend this bar as it can perform on or near the level of soundbars thirty to forty percent more expensive.

Sadly you must pay for the subwoofer. However, while my friend did not pay the additional $179.95, we were able to test it out at a local Best Buy. Although we did not have the chance to test it outside of a store environment, the 30 minutes or so we had to listen to it really impressed us. If I was making a buying decision on a new but basic sound system and needed a new bar and subwoofer, I would strongly consider this. The movie demo mode that was on display had a really popping base and the music selections we could hear demoed were quite strong. Again, it sounded like a sub that cost two to three times beyond the $179.95 price point.

But What if You Have Roku Already?

This might push quite a few people away because if your TV already comes with Roku, or you already own a Roku player, you are duplicating a feature you already have. Even still, if you need a strong soundbar and don’t mind the overlapping features, this bar is worth it—or you can just pay more for something nowhere near as good.

Final Verdict: 4.5 out of 5 stars—a recommended buy, for sure.

Where Can I Get a Deal On This?: Best Buy is selling the bar and subwoofer for a combined $299.95—a true steal.

Note: Harry has no personal connections to Roku nor was he compensated in any way for writing this article by Roku, nor does he own any Roku stock. The views expressed are his own.