One-Term President? Majority of Democrats Want Alternative to Biden in 2024 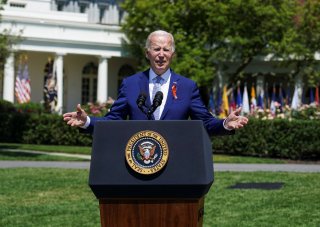 A New York Times/Siena College poll has found that nearly two-thirds of the constituency of President Joe Biden’s own party say that they prefer someone else at the top of the presidential ticket in 2024.

The Times report wrote that “President Biden is facing an alarming level of doubt from inside his own party, with 64 percent of Democratic voters saying they would prefer a new standard-bearer in the 2024 presidential campaign.”

It continued by mentioning that “voters nationwide have soured on his leadership, giving him a meager 33 percent job-approval rating.”

The survey further revealed that 44 percent of respondents admitted that they would cast their vote for Biden if the 2024 presidential election were held today, while 41 percent said they would vote for former President Donald Trump.

Meanwhile, just 26 percent believe that the Democratic party should even nominate Biden, who would be eighty-six years old at the end of a second term.

“More than three-quarters of registered voters see the United States moving in the wrong direction, a pervasive sense of pessimism that spans every corner of the country, every age range and racial group, cities, suburbs and rural areas, as well as both political parties,” the Times continued.

In recent months, Biden has continued to face immense pressure from within his own party to take more urgent action on inflation, protecting abortion rights, and gun control.

While high consumer prices will likely continue to be elevated throughout this summer, Biden did sign an executive order last Friday that takes incremental steps to preserve abortion access. This came two weeks after the Supreme Court’s controversial decision to overturn Roe v. Wade, the 1973 landmark decision that established the constitutional right to an abortion.

Biden also asserted that it’s ultimately up to Congress to codify Roe into law. “Let me be clear. While I wish it had not come to this, this is the fastest route available,” he said. “The fastest way to restore Roe is to pass a national law codifying Roe, which I will sign immediately upon its passage on my desk.”

The president also urged women to turn out in record numbers this November to elect more Democrats who support abortion rights. “You, the women of America, you determine the outcome of this issue,” he said.

Last month, in the wake of the devastating mass shootings in Buffalo, New York, and Uvalde, Texas, Biden signed into law a gun-control bill intended to prevent dangerous individuals from accessing firearms and increase investments in the country’s mental health system.

The bipartisan gun deal includes millions of dollars for mental health, school safety, crisis intervention programs, and incentives for states to include juvenile records in the National Instant Criminal Background Check System. The money can be used to implement and manage so-called “red flag” laws, which allow authorities to remove guns temporarily from people threatening violence. There are also significant changes to the process when an individual aged eighteen to twenty-one tries to purchase a firearm.