Operation Unthinkable Would Have Resulted in a War With the Soviets 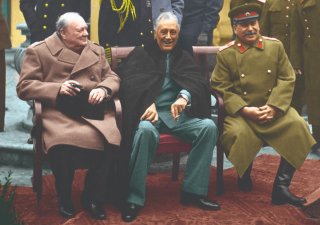 Winston Churchill may be viewed as the UK's greatest prime minister, and it is questionable whether anyone else could have led the British people through the Second World War. Yet, when it came to military strategy, Churchill was out of his depth and should have stuck to the toy soldiers he collected as a child. As First Lord of the Admiralty, he devised ambitious plans that were daring in design, yet all but doomed to fail.

That was certainly the case with the Dardanelles Campaign during the First World War. When the Royal Navy, with French support, couldn't easily sail up to the Ottoman capital of Constantinople to bombard the city, it mounted landings on desolate beaches. For some eight months, British and Commonwealth troops engaged Turkish forces and made little progress in moving inland. The disaster almost ended Churchill's career.

He, of course, returned to the Admiralty at the start of World War II, where he conceived other ambitious plans, and then as prime minister pushed for an invasion of Europe through Italy, which he had described as the "soft underbelly." It wasn't of course, and the resources spent there could have likely been better directed elsewhere.

Yet, perhaps the most audacious of Churchill's plans was the aptly named "Operation Unthinkable," which he conceived after meeting Soviet leader Joseph Stalin at Yalta.

"Poor Neville Chamberlain believed he could trust Hitler. He was wrong. But I don't think I'm wrong about Stalin," Churchill was reported to have said in reference to the Soviet dictator. And Churchill thought it best to deal with Stalin even as the Second World War was in its final stages. This wasn't actually a surprise. Churchill had never trusted Stalin, but that was very much in keeping with British policy dating to the 1930s. Prior to the war, the British never sought the Soviet Union as an ally and even rejected Stalin's overtures in the 1930s.

This belief informed Churchill's future war plans, which were devised by the British Chiefs of Staff to engage the Soviet Union. One part of the plan called for a surprise attack on the Soviet forces stationed in Germany to impose the will of the Western allies, and to claw back the eastern portion of Germany as well as Poland, which had fallen under Soviet domination. The British leader had felt guilty about the fate of the Polish people, who had fought so valiantly for the Allies during the Second World War, but whose future was to be dictated by Stalin.

Operation Unthinkable was to begin on July 1, 1945, with a massive Allied assault by British, American, Polish, and even German forces against Soviet positions. It wasn't, however, meant to topple the Soviet regime, but rather to push them out of the occupied territories. The danger was that the Allied forces could have risked being dragged deeper into Soviet territory and would have had to face the horrors of a Russian winter.

The odds weren't exactly good on paper. The Soviets had some 170 divisions, whereas the western Allies had just 47 divisions. Even rearming the German Wehrmacht and SS would have added just ten additional divisions. There was the likelihood that the Soviets would ally with the Japanese, and while Japan may have been on its knees, it wasn't beaten.

The Allies did have some advantages. The Soviets could barely feed their army by the summer of 1945, while the Allies had long-range bombers that could have devastated Soviet industry, where the Soviets had little to no hope of striking much ground beyond Germany. Moreover, the United States had the atomic bomb, and the Soviets didn't at that point. Perhaps the Allies could have won a quick victory, but it was unlikely the civilian populations, not to mention those doing the fighting, would have been that eager to take part in a war that could have dragged on for years or longer

In the end, Operation Unthinkable was not put forward, and Churchill was soon out of a job. The July 1945 general election saw him removed from office, and even if he had remained in power, it is unlikely President Harry S. Truman would have backed the plan. As a result, Operation Unthinkable remains little more than another "what if" of World War II.

Had it gone forward, however, it likely wouldn't have been as big a surprise for Stalin as the German invasion had been in 1941.

"That Churchill is capable of anything," Stalin had reportedly told Marshall Zhukov after Yalta. Maybe the Soviet leader knew something.