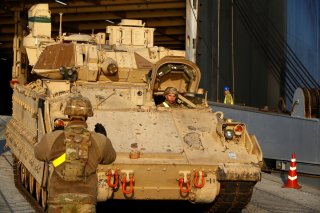 The U.S. Army must seriously want to replace the Cold War era Bradley Fighting Vehicle as it recently posted 14-pages of in-depth answers to industry questions about a rebooted Optionally Manned Fighting Vehicle program (OMFV), a weapons platform that could operate with or without a human crew.

The reboot of the OMFV program is a major about face for the Army, which canceled the first attempt back in January when no bidder could meet the ambitious schedule or technical requirements. Only one entrant was still in the competition, which actually was the third such time that the Army sought to replace the Bradley.

That effort began in 2018 as the Next Generation Combat Vehicle (NGCV), later dubbed the OMFV when it was determined that any replacement for the Bradley would need to be capable of operating unmanned. The Department of Defense (DoD) expected that several competing firms would step up but in the end it was a showdown between General Dynamics Land Systems' Griffin III and Raytheon/Rheinmetall's Lynx. But instead of a long and drawn out duel between the two firms it ended anticlimactically when Raytheon was unable to ship its only Lynx prototype from Germany in time for the first deadline in October.

As a result the plan became to stick with the Bradley, which had been developed in the 1960s to replace the M1113 Armored Personnel Carrier (APC). The Bradley program wasn't without controversy and while it has been in service for nearly 40 years it could be fairly described as a fighting platform no one wanted or really needed. Despite that fact, some 2,200 Bradley vehicles were deployed during Operation Desert Storm, where only three were lost to enemy fire and it actually outperformed the M1 Abrams tanks and destroyed more Iraqi armored vehicles.

However, following Operation Iraqi Freedom the Bradley has proved to be vulnerable to improvised explosive devices (IEDs) and RPGs. As a result the Army stopped using the Bradley in combat in favor of the MRAPs.

Twice before the OMFV program the Army tried to replace the Bradley, first in the early 2000s with a Future Combat System of vehicles, and then the Ground Combat Vehicle—but each attempt failed. To date the military has spent $18.5 billion without anything to show for it.

The latest reboot of the OMFV shouldn't be seen as a complete restart, as many of the requirements are unchanged but the Army made it clear that “No requirements from the first RFP (Request For Proposals) remain valid. This is a new RFP.”

This time the Army has put an emphasis on survivability over transportability. The OMFV characteristics were prioritized in the following order— the first time these were ranked:

The Army has stressed that the survivability would be against Infantry Fighting Vehicles such as the Russian BMP-3, and again survivability is a higher priority than even mobility.

This is also just the first step in what could be a long process. A formal RFP based on the latest OMFV characteristics won't come out until next April, and its working prototypes won’t likely be built until at least the summer of 2025.

While this means that the earliest a full battalion of OMFVs would be ready to roll won't be until September 2028—that is still ahead of the plans that could have kept the Bradley in use until the mid-to-late 2030s.