Into Orbit: Air Force Teams Up With NASA on Hypersonic Research 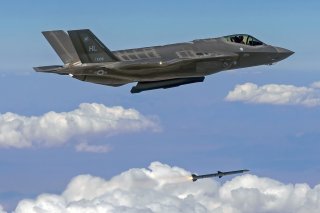 Current Air Force Research Laboratory (AFRL) basic research is already beginning to shape the technologies likely to inform hypersonic weapons construction in the coming decades. At the same time, it is generating near-term results, including a first-of-its-kind breakthrough test of the hypersonic Air-Launched Rapid Response Weapon from a B-52.

Maj. Gen. Heather Pringle, commanding general of the Air Force Research Lab, told the National Interest that AFRL scientists are now intensely focused on basic research in the realm of hypersonics, with a specific emphasis on finding paradigm-changing materials, guidance systems, and explosives. Many of the collaborative efforts, Pringle explained, involve key partnerships between the AFRL and allied nations, industry collaborators, and even universities.

For instance, should the airflow surrounding a hypersonic projectile be smooth, the weapon is more likely to stay on course to its target when it travels at speeds over five times the speed of sound. However, turbulent airflow can cause molecules to move in the immediate area surrounding the weapons, greatly impacting the temperatures needed to sustain hypersonic flight. One of the main reasons there is so much exploration of new composite materials is that scientists continue to search for newer, more heat-resistant combinations of chemicals, composites, and materials to increase the likelihood that a hypersonic weapon can sustain its trajectory or even adjust in flight to hit moving targets.

As part of this effort, the AFRL is partnered with NASA, Australia, and various American university partners. “As recently as the 21st of March of this year, we conducted an experiment at NASA Wallops Flight Facility. We had a boundary layer turbulence bulk flight experiment, which successfully launched,” Pringle said.

Pringle explained that the successful test is already mapping out new areas of focus.

“What this did is it helped inform the research at the boundary layer where the air is so much more turbulent. We were looking at some complex geometries that are different from the systems that we have today. By doing these kinds of experiments, by partnering in these ways, and basic research, then we're informing the shapes of the weapons and the aircraft and the flight systems that we have in the future. So, basic research is near and dear to our hearts and something that we have invested in for a long time,” Pringle said.