Out With the Old: Why the Pentagon Wants Upgraded Refueling Tankers 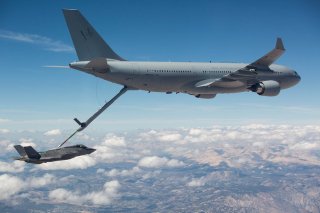 Though the United States has the world’s largest air-to-air refueling tanker fleet, the Department of Defense (DoD) would like to squeeze even more capabilities from the fleet. The DoD published a concept of design (CoD) request for a tanker aircraft that would have several advantages not offered by previous tube-type tankers.

The CoD explains that “the Department of Defense (DoD) is seeking a concept of design (CoD) of an advanced aircraft configuration that provides at least 30% more aerodynamic efficiency than the Boeing 767 and Airbus A330 families of commercial and military aircraft, enabling operational advantages such as increased range, loiter time, and offload capabilities. When integrated with projected 2030 engine technology, this advanced aircraft configuration is expected to provide at least 60 percent mission fuel burn reduction compared to current day technology."

The potential aerodynamic advantages offered by a blended wing body-type aircraft are significant. “In support of the 2018 National Defense Strategy (NDS) and the 2022 NDS Fact Sheet, the DoD is committed to improving our capability and readiness by accelerating operational energy technology advancements and innovation,” the request explains.

The CoD adds that “the Department is presently the largest consumer of petroleum-based energy in the Federal Government, contributing to 77% of overall consumption. The majority of that is attributed to fuel for aircraft sorties supporting global operations. Decades of research and development indicate that advanced airframes such as blended wing body (BWB) aircraft present aerodynamic efficiencies that could both reduce fuel consumption and increase operational effectiveness, enabling longer-range sorties and reduced fuel logistics/supply chain risks.”

Not only could a blended wing body-type aircraft benefit from lower aerodynamic drag in flight, but it would also have a greatly expanded internal volume with which to transport fuel compared to a conventional tube-type tanker aircraft.

Though increased fuel efficiency is obviously useful in any combat theater, it would be particularly advantageous in the Pacific. In a hypothetical fight in the Pacific, American war planners would have to contend not only with an enemy but also with the Pacific’s extreme distances. While there are a number of American outposts throughout the Pacific—in Hawaii, Guam, northern Australia, and elsewhere—air-to-air refueling is an important part of a potential American war strategy.

So while blended wing body-type tankers are still an unrealized future capability, the benefits are very much real.