Can Drones Do It All? A New Report Thinks So 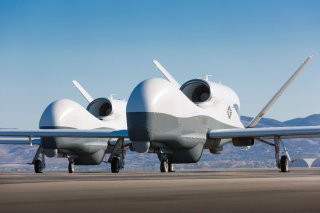 The Congressional Research Service, a non-partisan think tank that prepares reports for the U.S. Congress, recently released a document describing what the future of Unmanned Aircraft Systems (UAS) could be and what role they might play in the future.

One of the document’s most interesting sections laid out what the roles of unmanned aerial aircraft could be and explained “potential UAS roles and missions in future military operations. These include aerial refueling, air-to-air combat, combat search and rescue, strategic bombing, battle management command and control, suppression and destruction of enemy air defenses, and electronic warfare.”

Putting a UAS to work refueling other aircraft—particularly on long-distance missions such as in the Indo Pacific—“can potentially reduce the threat to crewed tankers.” It added that the U.S. Navy is “procuring the MQ-25 Stingray carrier-based UAS for such operations,” a UAS that, while not as discrete as some manned aircraft, nonetheless benefits from a somewhat stealthy design.

The document also explained that the Defense Advanced Research Projects Agency, better known by its acronym DARPA, “has also conducted research to test the suitability of RQ-4 Global Hawk UAS aircraft as long endurance refueling platforms, but the military services have yet to develop formal requirements for this role.”

Another area that could be ripe for UAS application is as an unmanned fighter for air-to-air combat. Recently, “demonstrator programs like the Boeing Loyal Wingman seek to add air combat into the mix of fighter aircraft,” the document explained.

Another area of high interest would be teaming-type operations in which piloted aircraft work in tandem with unmanned but armed aircraft, potentially accessing high-risk areas on the pilot’s behalf.

This manned-unmanned idea is “the focus of the U.S. Air Force Skyborg program and the Airpower Teaming System, which is undergoing trials in Australia. Other concepts rely on a more autonomous model, with uncrewed fighters clearing airspace ahead of attacking crewed fighters or bombers.”

Thanks to UAS’ “endurance and reduced size [a crew of zero],” they could excel in a high-threat environment. Additionally, “military leaders may potentially accept a greater risk of attrition for UAS in these situations. Such factors could enable the military to station UAS closer to front lines than crewed aircraft, potentially reducing the time needed to locate and evacuate personnel.”

The document also referenced the Silent Arrow, a semi-autonomous pilotless glider launched from cargo planes. In the future, a variety of systems could be employed to land large quantities of cargo to remote locations around the world.