In Case You Haven’t Heard, the Air Force and DARPA Just had an Accident 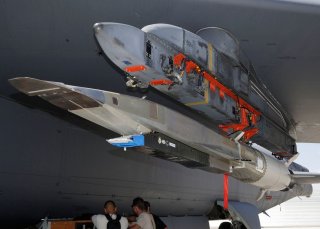 During a test flight the HAWC missile in question somehow separated from the pylon mating it to the B-52 delivery plane. The flight was intended as a “captive-carry flight test” only, the missile was not intended to separate from its pylon.

DARPA says that the HAWC missile “seeks to develop and demonstrate critical technologies to enable an effective and affordable air-launched hypersonic cruise missile. The program intends to emphasize efficient, rapid and affordable flight tests to validate key technologies.” The missile itself is quite fast.

It can fly at Mach 5 and greater, which is five times the speed of sound. This particular scramjet missile is designed to give the United States better stand-off capabilities and to keep enemies off guard by reducing their window of response time. In particular, DARPA lists several of “technologies of interest” including sustained hypersonic cruise flight and managing the stress caused by thermal heating on the missile’s skin. Of course, one of the big requirements is program affordability.

While capable, this isn’t the first problem the HAWC missile has encountered. The HAWC missile is reputedly at least a few months behind schedule and was supposed to undergo in-flight testing at the end of 2019, though these tests did not occur for reasons that are still not totally clear.

Lastly, people familiar with the matter have indicated that debris from the crashed missile was collected for technical evaluation. As pointed out, this strongly indicates the flight test that was over land, rather than sea. The China Lake military installation has been suggested as one possible testing location.

Both China and Russia have begun fielding hypersonic and supersonic missiles in recent years. Russia in particular has enjoyed the distinction of being the first country (that we know of) to successfully launch hypersonic cruise missiles underwater from a submarine.

China too seems to be farther ahead in the hypersonic game. Their DF-17 hypersonic missile—technically a glide vehicle—debuted in 2019 during China’s annual National Day parade. This particular parade was especially significant, as it marked the 70th anniversary of China’s founding. The missile ruffled some feathers too.

Is the United States falling behind in the realm of super-fast missiles? Hard to say. Accidents like the one earlier this week could arguably happen anywhere. Let’s hope it is just a one-off and not a recurring pattern.