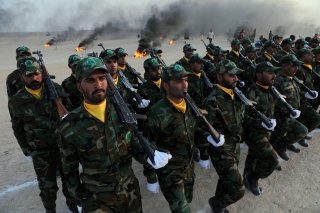 Iraqi prime minister Mustafa al-Kadhimi survived an assassination attempt targeting his residence on November 7. An explosive-laden drone struck the Green Zone residence and injured seven of Kadhimi’s bodyguards, according to Ministry of Interior Spokesman General Saad Maan. This attempted assassination follows an uptick in tensions in Iraq after Iran-linked groups denounced the general election that weakened their influence and put them in the hot seat.

Hours after the attack, Reuters reported that at least one Iranian-backed militia was responsible. According to Reuters’ sources, the materials used in the assault were Iranian-made. This assessment aligns with the modus operandi of various factions of Iraq’s Popular Mobilization Forces (PMF). The PMF, once part of the multi-coalition effort to defeat ISIS, has metastasized into a full-blown proxy functioning solely to further Tehran’s influence in Iraq.

These militias are responsible for the dozens of drone attacks that have barraged Baghdad’s fortified Green Zone, including U.S. diplomatic and military sites, over the last year. Additionally, Iranian-backed groups have turned to more lethal and dangerous explosive-laden drones in recent months, such as the high-tech weapon used to attack the Iraqi prime minister on November 7.

In June, the commander of the U.S. Central Command, General Kenneth McKenzie, discussed how Iran and its proxies have begun to use more sophisticated small unmanned aerial systems to dangerously escalate dynamics in the region. McKenzie said that “[Iranian militias] are resorting to this technique because they have been unable to force the Government of Iraq to require that we leave. So, political pressure has not worked for them; now they’re turning to a kinetic approach.” This statement points to the proxies’ goal of maintaining influence in Iraq’s polity through violent means, which the assassination attempt of the prime minister reflects.

Following the assault on the prime minister, Kadhimi took to Twitter to call for “calm and restraint from everyone.” He added that "I was and still am a redemption project for Iraq and the people of Iraq. The missiles of treachery will not discourage the believers and will shake a hair of the stability and determination of our heroic security forces to preserve people's security, achieve justice and set the law in place."

Kadhimi has had a rocky relationship with the PMF militias throughout his tenure in office. Kadhimi was appointed to serve in 2019, following months of protests and demonstrations aimed at limiting Iran’s influence in the country’s political, economic, and societal realms. The prime minister made unprecedented moves against the militias by overseeing the arrests of several militants, raiding the headquarters of the prominent Kataib Hezbollah faction, and vowing to compensate the families of civilians killed by Iranian-linked groups during the 2019 “Fall Revolution.”

Tensions between Kadhimi and PMF groups have escalated in recent months after he pledged to counter the militias in a series of joint dialogues with U.S. officials. The prime minister also worked to minimize Iraq’s energy dependence on Iran by securing alternative power sources through the Gulf Coalition Council (GCC). These actions certainly spurred resentment by Tehran, as the regime’s leaders feel that their clout in Iraq dwindling.

Iran’s colossal defeat in the 2021 parliamentary election only added to the litany of upsets that the PMF groups have experienced during Kadhimi’s tenure. Although the assassination attempt failed, Iranian linked groups will likely try other methods to overturn the election results and remove parliamentary members from office.