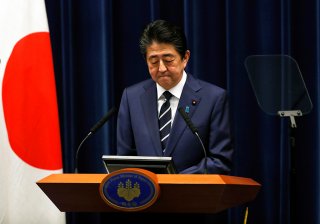 As two early-hit countries in the global coronavirus epidemic, rivals China and Japan present an illustrative case on the pandemic’s impact on bilateral ties through the lens of political influence. While China initially tried to leverage the pandemic to bolster its own image, the pandemic may have caused long-term harm to Beijing’s reputation. The damage likely includes Beijing’s relations with Tokyo, potentially jeopardizing the two-year China-Japan fragile détente, as I anticipated earlier this year.

Over the past 12 years, China-Japan relations have transformed dramatically. Both nations have seen the rise of the strongest leaders in their respective modern histories, with Japanese Prime Minister Shinzo Abe serving his fourth term in office and Chinese leader Xi Jinping positioned to serve for life. Both leaders have consolidated their domestic executive power. The two countries hosted, and will host, symbolic Olympic Games (Beijing in 2008 and Tokyo postponed to 2021—and Beijing again in 2022), pitting one another in a global image competition.

After decades of enjoying the lead economic position in Asia, Japan relinquished its global No. 2 annual GDP ranking to China in 2010 and ended its decades of support to Chinese development aid in 2018. The bilateral relationship reached a historic low in 2010-2012 over claims to the disputed Senkaku Islands (Diaoyu in Chinese). In early 2020, again, the COVID-19 outbreak from Hubei, China, sparked another round of anti-Chinese sentiment, and the hashtag #ChineseDon’tComeToJapan, although China sought to use the crisis to bolster its image.

The uncertainty generated from U.S. President Donald Trump’s trade war with China had compelled these two rivals to temporarily put aside their differences and pursue in 2018 a pragmatic “tactical détente” or “new start” in the relationship, emphasizing shared interests in trade, tourism, and diplomacy. Xi’s expected state visit to Japan (now postponed due to the coronavirus) was a potential litmus test for producing a “fifth political document” defining the relationship. Under Xi, China has embarked on a global influence campaign, including the ambitious Belt and Road Initiative (BRI), which seeks to fortify China’s image more than disrupt global politics. What can we make of the impact of the pandemic on this bilateral détente?

Messaging Around the Coronavirus Outbreak

The pandemic story starts at the end of 2019 when the WHO was informed of pneumonia cases of unknown origin detected in Wuhan, China’s seventh largest city. The virus spread quickly since then not just in China but globally with cases of infection surpassing 3 million cases worldwide, including more than one million in the United States, by the end of April 2020. China suffered its cases early on with more than 80,000 cases of confirmed infections. Japan had more than 13,000 cases of infection by the end of April, many of which occurred on the Diamond Princess cruise ship. An infectious diseases specialist described Japan’s handling of infections on the ship as “far worse than in Africa or China.”

Amid the global panic and Xi’s expected state visit to Japan in the spring, Chinese officials, state media, and social media spread warm messages about Japan. Positive messages about Japan dominated Chinese social media as a reaction to an abundance of positive Chinese media reports on Japan’s assistance to China. China’s Director of the Foreign Ministry Information Department Hua Chunying in February tweeted, “As neighbors across a narrow sea, let’s help each other in times of need” via her new Twitter account. China’s state-run Xinhua News Agency showed appreciation of the Japanese government’s immediate response to the coronavirus outbreak in China by sending masks, goggles, and gowns in boxes that displayed a Chinese-language verse, “Although we are in different places, we are under the same sky.”

This response went viral and received more than 170 million views on China’s Weibo SNS platform and was met with gratitude on the Japanese embassy’s Weibo account. When a Japanese official who was tasked with looking after Japanese citizens who had been evacuated from Wuhan was suspected of taking his own life, Chinese internet users mourned the loss. The Japanese language version of China’s state media People’s Daily online praised Japan’s former prime minister Yukio Hatoyama, a known friend of China, for sending masks to the Memorial Hall of the Victims of Nanjing Massacre by Japanese Invaders.

The Japanese government’s early and overall response to the virus was mild, perhaps out of respect to China. It took until February 1, a day after the United States stopped all foreign travelers from China, for Japan to start denying entry to people from China’s Hubei province. Many direct flights from other parts of China remained in place. Prime Minister Abe stayed under the radar early in the crisis by deferring leadership to his health minister. Critics argued Abe hoped to avoid offending China ahead of the planned state visit by Xi scheduled for April.

Jiji Press reported that the Chinese government has asked Japanese government “not to make a big deal (out of coronavirus),” resulting in Japan’s slow response. As cases of infection rose, critics worldwide began questioning Japan’s capability to host the Olympics in July 2020. After Abe hosted his first press conference on February 29 and announced the closure of all schools in the country, “# Abe Yamero (Abe, quit)” was trending in Twitter.

Similarly, there was anti-Chinese sentiment and anxiety about the impact of the virus on the Tokyo Olympics on Japanese Twitter, with the trending hashtag #ChinesedontcometoJapan. But when Alibaba founder Jack Ma sent one million masks to LDP’s pro-China secretary general, Toshihiko Nikai, in early March, Japan’s Justice Minister Masako Mori tweeted, “Thank you, Jack” and calling him a “friend” whom she had a “deep conversation with in December;” that tweet also was met with criticism by Japan’s right-wing novelist Naoki Hyakuta. The Japanese government finally announced a suspension of travel visas for travelers from China on March 5, the same day that the Japanese government officially announced Xi’s state visit was to be postponed due to the virus.

The table was already set last year for potential risks with two acute episodes, revealing how fragile the bilateral détente was to begin with. China’s interference is sometimes catalogued as “three Cs:” covert, corrupt, or coercive. One episode late in 2019 involved charges of corruption. Days before the pandemic was discovered in December and a day after Abe had expressed his enthusiasm for Xi’s state visit, ruling party politician Tsukasa Akimoto, who had been a key figure in crafting Japan’s new integrated resorts development strategy, was arrested for allegedly receiving a total of JPY 3.7 million ($33,000) in bribes from China’s leading online sports gambling service provider, 500.com. Akimoto is also accused of receiving 700,000 yen to cover his trip to Hokkaido in February 2018 while he was senior vice minister in charge of overseeing government’s integrated resorts strategy. He served in that post from August 2017 to October 2018. The Chinese government-backed chipmaker, Tsinghua Unigroup, is a major shareholder of the Shenzhen-based 500.com, implicating the Chinese Communist Party to the scheme.

The second episode was one of coercion. In September 2019, Nobu Iwatani, a respected China scholar and professor at Hokkaido University, which is one of Japan’s top national schools, was detained while attending a conference in Beijing. Iwatani was released in November 2019 after reportedly confessing to collecting a large amount of “classified information,” but his arrest had already damaged the China-Japan relationship. A group of 130 Japanese academics who specialize in China signed an open letter, which was drafted by the normally-sympathetic Japanese Association of Scholars Advocating Renewal of the Japan-China Relationship, demanding that China explain its actions. They argued that the arrest damaged trust between the two nations and was a shock “beyond words.” Since Iwatani’s arrest, many Japanese scholars have canceled research trips to China. Interviewees for this research described the arrest as a form of political bullying or coercion to send a message to Japan.

Since then, the bilateral relationship has gotten even rockier. On April 7, 2020, the day the Japanese government declared a state of emergency from the coronavirus, the government approved its largest-ever stimulus package of 108 trillion yen or about 20% of Japan’s annual GDP. The emergency stimulus included a budget to improve Japan’s information warfare amid the pandemic.

The Ministry of Foreign Affairs (MOFA) was allotted 2.4 billion yen to improve the country’s information strategy to eliminate anti-Japanese messages regarding the coronavirus. The foreign ministry will use artificial intelligence (AI) to analyze comments on social media abroad and correct “wrong understandings.” MOFA has been emphasizing the importance of strategic communication to promote the “correct” understanding of Japan. In addition, Ministry of Health, Labor and Welfare was also given 3.5 billion yen for public relations targeting both domestic and overseas audience including proactively dispatching information abroad.

For China, Japan’s stimulus package also might represent the tip of the iceberg in a turning tide against China. The spending included $2.2 billion to “develop a resilient economic structure,” including 220 billion yen to promote “domestic investment” (in Japan) for Japanese supply chains and 23.5 billion yen to support “diversification” supply chains. Although the finance ministry does not explicitly use the word “China,” this allocation is understood to be aimed at helping Japanese companies relocate their supply chains outside of China to either Japan or elsewhere, such as Southeast Asia. The prospect of foreign companies leaving China during an economic slowdown has created intense anxiety in Beijing.