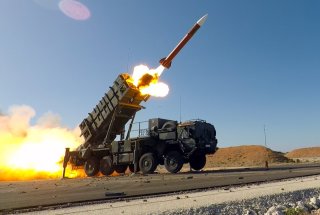 Moscow might use a move by Washington to give Patriot missiles or other strategically impactful weapons to Ukraine as a pretext to justify invasion.

As fears of a new Russian invasion of Ukraine in the winter of 2021/2022 grow, Kiev has renewed requests for military aid it hopes could offset Russia’s quantitative, geographic, and technological military advantages.

The Ukrainian Air Force already announced plans to upgrade four of its brigades with thirty-six to forty batteries of new surface-to-air missile systems by 2025. Sympathetic U.S. congressional representatives have also promoted the transfer of air defense missiles to Ukraine for several years.

When Russia intervened in Ukraine in 2014 to 2015, Moscow mostly did not employ airpower to preserve deniability. Should Russia invade Ukraine again on a larger scale, its warplanes and many cruise and ballistic missile platforms could cause massive devastation that cripples radars, power plants, commander centers, and munition depots in Ukraine and destroy artillery batteries and columns of armored vehicles attempting to reinforce the frontline.

It's fully understandable that Kiev wants modern air defenses to mitigate the damage of such a scenario. But the risk of renewed war with Russia is dangerously near—and Patriot missiles cannot help Ukraine in such a timeframe.

Ukraine’s remaining jet fighters and bombers are dated and could play a supporting role at best against Russian airpower if they are not destroyed on the ground by missiles and airstrikes in the opening days of the onslaught. Furthermore, rebuilding the air force with modern aircraft is a decade-long project that will cost billions of dollars.

Instead, Ukraine’s primary air defense must come from its hundreds of old Soviet-era surface-to-air missile batteries. However, the Russian military is deeply familiar with these forty-year-old systems and has had ample time to devise countermeasures, including electronic warfare and radar-homing missiles.

Even worse, Ukraine’s systems are all nearing the end of their service life and require upgrades or depend on parts like klystrons (a type of vacuum tube) only available via smuggling from Russia. To be fair, Ukrainian firms have made progress in developing domestic substitutes and upgrades for various systems, but some components are proving nearly impossible to replace.

Furthermore, only a minority of Ukraine’s surface-to-air missile batteries have ballistic missile defense capabilities with which to offset the four brigades of precise Iskander ballistic missiles Moscow has deployed around Ukraine’s borders. But on the upside, Ukraine’s air defenses have mass and multi-layer coverage that might impede or delay a Russian attack.

The three S-300 types are dispersed into five or six brigades and a similar number of independent regiments. Each battery can threaten both high-altitude aircraft and low-flying cruise missiles and engage many targets simultaneously. Though the S-300’s capabilities are respected, Ukraine’s S-300s are early types with a drastically shorter range (fifty-six to sixty-five miles) than post-Soviet models.

Ukraine’s second air defense pillar is its seventy-two tracked medium-range Buk-M1 (NATO codename SA-11 Gadfly) air-defense systems in three regiments. These are supplemented by a smaller number (two regiments/five battalions) of S-125M Pechora (SA-3 Goa) refurbished into service from 2015 to 2017 with new radar-guidance seekers and indigenous propellant. Reportedly, these fixed quad-rack launchers are situated for defense of strategic infrastructure and integrated into the control network of S-300 systems. Both the Buk-M1 and updated S-125s are effective out to twenty to twenty-five miles and can threaten high-flying aircraft, though the static S-125s are vulnerable to standoff strikes.

Ukrainian defense expert Mikhail Zhirikov writes, “There is a lot of talk about the possible purchase of American Patriots, but in our conditions, this is unrealistic since it is very expensive and it is unlikely that Washington, with all allied relations, will give permission for their supply outside NATO.”

Indeed, sales of advanced weapons take years to arrange under far less difficult circumstances, and export controls would make transfers of the Patriot highly sensitive. Even if Washington gave the Patriot batteries to Kiev on its own dime, it’s far from clear that Ukraine’s Air Force could afford their high operating and maintenance costs.

Indeed, Ukrainian forces would need to invest massive resources in training hundreds if not thousands of troops to operate the complex and unfamiliar system—and devise a way to integrate the U.S.-built Patriots into its Soviet and domestic radars and missile batteries.

Most frustratingly, Moscow might use a move by Washington to give Patriot missiles or other strategically impactful weapons to Ukraine as a pretext to justify invasion. After all, Russian president Vladimir Putin wants Ukraine to remain influenceable by military coercion and has communicated that transferring strategically relevant weapons to Ukraine crosses a red line that could justify an invasion. These threats may be objectionable, but their objectionability doesn’t make the risk of war go away.

The Patriot isn’t the only system to attract Ukrainian interest. The deputy mayor of Mariupol, a strategic port city, which came under a rocket artillery barrage in 2015 that killed thirty civilians, claimed he was looking into purchasing the Iron Dome system that was developed by Israel to counter Palestinian rockets. Iron Dome batteries could certainly protect against long-range rocket artillery and perhaps cruise missiles, but funding to adopt the expensive and specialized system seems unlikely.

The National Advanced Surface-to-Air Missile System (NASAMS), combining Norwegian launchers and control systems with U.S.-built AIM-120 Advanced Medium-Range Air-to-Air Missiles (AMRAAMs), has also been suggested as a short-to-medium-range air defense solution. The radar-guided weapon has an engagement range of up to fifteen miles and up to 52,000 feet. NASAMS would still involve U.S. export controls but might be easier to integrate and faster to acquire than Patriot. But “faster” in the sense of “fewer years,” rather than, say, next month.

However, in late November 2021, it was reported the Biden administration was considering an alternative: supplying man-portable FIM-92 Stinger missiles to Ukraine. These shoulder-launched weapons have a maximum range of five miles and an altitude of 11,000 feet and are guided by a combined infrared/negative-UV light seeker.

Stingers can’t threaten high-flying warplanes nor stop ballistic missiles; however, they do threaten Russia’s surveillance drones used for targeting deadly missile and artillery strikes, as well as transport and attack helicopters, and may also be useable for last-ditch cruise missile defense. The Stinger threat might also compel Russian attack aircraft to release their predominantly unguided weapons from higher altitudes with lower accuracy as they did in the Syrian Civil War—or expend limited stocks of precision-guided munitions.

As tactical-level weapons, Stingers would be less sensitive than Patriot missiles, though Moscow would surely still complain. Moreover, Stinger missiles would not require specialized infrastructure, would be easier to train soldiers to operate, and could be dispatched to the field relatively quickly. Of course, Stingers wouldn’t address Ukraine’s high-altitude/missile defense needs but most likely nothing can in the near term.

Unfortunately, transfers of kinetic weapons to Ukraine may increase Russian paranoia and belligerence, and whether a weapon’s military and/or symbolic benefits outweigh the risk of “anti-deterrence”—i.e. making Russia more, not less, likely to attack—must be carefully considered. During times of high risk, helping Ukraine upgrade its many outdated air defense systems could yield greater and faster security benefits for lower cost and political risk.