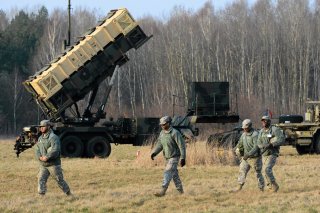 The United States has deployed two batteries of Patriot missiles to Poland along NATO’s eastern flank. The missile defense system arrived at an airport not far from the Ukrainian border.

Ukraine’s air defenses continue to play an important role in protecting against Russian aircraft, but there has been little progress in augmenting those forces with additional air defense systems. The U.S. Department of Defense declined a proposal to accept Polish MiG-29 fighter jets to be transferred to Ukraine.

While smaller, man-portable air defense systems (MANPADS) continue to flow into Ukraine from the United States and NATO countries, more advanced systems have not been committed.

“I don't have any updates for you on S-300s or other sophisticated air systems, except to say that we continue to talk to allies and partners, in and outside the region, about Ukrainian air defense needs,” an unnamed senior Department of Defense official said on Monday. “Those nations really should speak for themselves in terms of what they're willing to provide.”

The S-300 is a Soviet-era air defense system operated by both Russia and Ukraine. It was introduced in the late 1970s, at about the same time the U.S. Army began deploying Patriot missile batteries.

For the United States and NATO allies, the Patriot missile batteries in Poland are able to defend the area near Poland’s border with Ukraine.

Modernized Patriot missiles would be in good position to track and intercept some of the weapons now being fired by Russia. Patriot missile systems have received several upgrades over the years, including improvements to software, guidance technology, and radar systems networking. A Patriot missile successfully destroyed a cruise missile in a live-fire test in 2020.

The National Interest spoke with Daryl Youngman, deputy director of the Air and Missile Defense Cross Functional Team, Army Futures Command in August 2021 about the progress of these innovations. Enhanced Patriot connectivity is an integral part of the Army’s Integrated Battle Command System (IBCS), an air and cruise missile defense system that connects targeting and sensor nodes across a wide operational envelope. Youngman said that during one assessment, the IBCS system networked Patriot missile batteries to other ground nodes and F-35 Lightning II fighter jets.

IBCS can track maneuvering targets and share that data with airborne F-35 jets and ground-based Active Electronically Scanned Array radars. The multi-domain functionality is designed to support the Pentagon’s Joint All Domain Command and Control effort to synergize connectivity between the services.