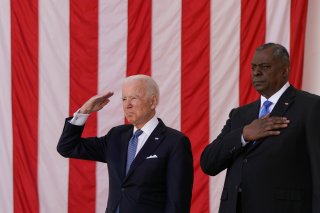 The Department of Defense announced on Tuesday that it had completed the 2022 National Defense Strategy, or NDS, and submitted it to Congress for review.

The NDS is a document prepared by the Defense Department every year that details its priorities and describes the United States’ broad strategic objectives. The Pentagon summarized those objectives in the statement, saying that the 2022 NDS “sets out how the Department of Defense will contribute to advancing and safeguarding vital U.S. national interests—protecting the American people, expanding America’s prosperity, and realizing and defending our democratic values.”

The statement added that the NDS was the “capstone strategic guidance document” for the Department of Defense and would “translate … national security priorities into guidance for military planning and activities.” It linked the drafting of the NDS to President Joe Biden’s “Interim National Security Strategic Guidance,” a document released in March 2021 that outlined the Biden administration’s broad strategic objectives.

The NDS submitted to Congress contains classified information and is not made available to the public. Following a review and redactions, an unclassified version will be published for general use, alongside the National Security Strategy, a similar document also prepared by the Department of Defense.

Although the unclassified NDS has not yet been released, the Pentagon’s statement included a two-page “fact sheet” that broadly described its contents. The fact sheet highlighted four main objectives of U.S. defense strategy in 2022: defending the American homeland, deterring attacks against the United States and its foreign allies, deterring foreign aggression, and strengthening America’s “Joint Force” and defense ecosystem. It indicated that the military would advance those goals through “integrated deterrence,” “campaigning,” and “actions that build enduring advantages.”

The summary highlighted the challenge to the United States from the People’s Republic of China, describing it as “our most consequential strategic competitor” and naming it as the “pacing challenge” for the U.S. military. It also identified Russia as an “acute threat” and emphasized the role of NATO in countering Moscow.

Although Iran and North Korea were also mentioned as “persistent threats,” the summary devoted more attention to less conventional threats to U.S. national security, including climate change and the dangers of another global pandemic, which it noted had “transform[ed] the context in which the Department operates.”

“We will adapt to these challenges,” the document read, adding that the Pentagon would “take necessary actions to increase resilience—our ability to withstand, fight through, and recover quickly from disruption.”