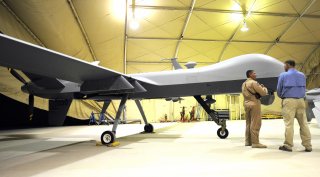 If a forward-operating drone suddenly recognized an entire mechanized column of enemy tanks emerging from wooded areas on the backside of a mountain, and the force was in a position to close in on allied ground positions ill-equipped to respond or counterattack, survival and potential victory in war would rest upon several key variables. One of these variables is speed. How fast could video images of the approaching tanks reach human decisionmakers in ground control centers? How quickly could the one-minute of video showing the emerging tanks be found from within hours and hours of drone video feeds? How can the tanks be identified and located in terms of movement, terrain, weapons or angle of approach? Can the newly arriving sensor information be processed and transmitted? Should the target detail reach other drones, nearby allied ground forces or even fighter jets in range to launch air attacks on the tanks? The answer to all of the above is “yes.” In order to keep forces alive and preserve an opportunity to prevail in war or even counterattack, processed information would need to reach the right places in position to respond immediately.

Instead of needing to rely solely upon point-to-point connectivity between a drone and a single ground-control station when it comes to receiving and processing actionable warfare intelligence, what if armored vehicles, ground artillery, fighter jets, or even dismounted forces in position to respond could be informed instantly? Perhaps they could receive targeting specifics, complete with threat details, navigational information, geographical specifics and data on a target’s speed of approach and anticipated attack point? Instead of slower, more segmented one-point to one-point information transmission, which is subject to significant latency concerns, what if all of the crucial detail needed to stop the attack could instantly be identified, analyzed and networked across an entire force?

The ability to network time-sensitive targeting and intelligence information across a massively dispersed force of integrated combat “nodes” in real-time, such as that which would be needed in these kinds of scenarios, is exactly what the Pentagon and U.S. military services are working toward accomplishing with artificial intelligence and data processing.

“Sensor to shooter time,” warfare “at the speed of relevance,” improving “situational awareness” and utilizing a “kill web” are common terminologies used to describe the need for this kind of high-speed, data-driven warfare. The success and promise of artificial intelligence is why the Defense Department wants to bring it to the edge of war.

“Teams will go out within the next ninety days to every single combatant command and start to tie in their data, and they’ll also have technical expert teams on AI and they’ll start looking at how to bring AI and data to the tactical edge in support of the warfighter,” Deputy Secretary of Defense Kathleen Hicks said during a virtual briefing in June 2021.

The task of bringing artificial intelligence to the very edge of war is not without challenges. The unprecedented breakthrough advantages offered by artificial intelligence, which are already redefining warfare, collide with the sizable and difficult challenge of simply having too much information. How can critical points of relevance, such as time-sensitive warfare decisions, be identified quickly amidst vast, endless volumes of collected intelligence, surveillance and recognizance data? Hours of video, thousands of images and millions of data points need to be organized, tailored, streamlined and transmitted to the right place as needed, within seconds, for a force to prevail in war.

This is the beauty of artificial intelligence, as it can use computer processing speed and advanced algorithms to “flag” the crucial five seconds within five hours of video surveillance.  Data can be compiled, analyzed, processed and bounced off of and compared against a seemingly limitless database in milliseconds. Using artificial intelligence and computing speed to perform crucial procedural, organizational and analytical functions can free up human decisionmakers to leverage their best attributes.

“Customers are overwhelmed by data today. . . . We have to help them get out of the data loop,” Jim Wright, Raytheon's technical director for intelligence, surveillance, and reconnaissance systems told Warrior Maven. “And on this theme, the thing that the human being does do well, and that's using intuition, that kind of advanced thinking, to figure out what to do next, you need to make sure they're solidly in that domain, and not having to do with what machines can do.”

The process of gathering, organizing, analyzing and transmitting new sensor data, often referred to as processing exploitation and dissemination, has taken on new significance as artificial-intelligence-enabled information sharing continues to expand across platforms and domains to massively shorten “sensor-to-shooter” time and help attackers stay in front of or ahead of enemy decisions. Doing this effectively requires an ability to perform high-speed data organization, something which is itself being enabled by artificial intelligence.