The Pentagon Has a Plan to Expand Its Satellite Constellation 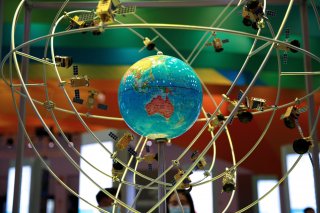 The Pentagon is taking new measures to connect and mesh satellites together to track targets in war, share surveillance information and detect enemy missile launches by acquiring large numbers of new Low and Medium Earth Orbit satellites and hardening connections between them.

The United States is adding new constellations of Very Low Earth Orbit Satellites, lower flying, smaller platforms able to move faster and operate with much higher levels of throughput. The satellites are engineered to track ground activity while also sharing information between themselves to blanket otherwise separated areas with surveillance operations. Additional numbers of satellites also help ensure “redundancy” and “disaggregation,” two elements of the Pentagon strategy to ensure continued space functionality in the event that some satellites are destroyed.

“We are looking at ways to increase bandwidth and resilience in satellite networks and using LEO (Low Earth Orbit) satellites to thicken the network in certain areas,” Maj. Gen. John George, the commander of Combat Capabilities Development Command for Army Futures Command, told reporters at the Association of the United States Army Symposium.

Connected satellites can ensure that fast-moving emerging enemy weapons, such as hypersonic weapons, can be tracked more continuously and not handed off from one segmented radar to another. This is of great importance given that the speed of hypersonic missiles is such that it would be very easy to immediately lose track of an attacking weapon as it transits from one radar field of view to another.

There are several interesting technical elements here, such as current initiatives to integrate ground terminals successfully to each other through large-scale cloud migration with various kinds of hardened transmission systems.

Sensors that have been built into satellites will also increasingly perform more independent command and control functions, in some instances helping to discern the difference between an actual ICBM or nearby decoys intended to thwart and confuse defenses. Most seekers at the moment often rely upon missile-integrated sensors tasked with guiding various anti-missile weapons called “Kill Vehicles.”

“We have to have the resilience to move across different parts of the network to ensure connectivity,” George said.

Part of the strategy includes keeping pace with and ultimately overmatching China’s rapid advancement in the area of space weapons. China is known to have successfully tested anti-satellite weapons on several occasions and, much like Russia, has been moving to weaponize space quickly. China is also quickly adding new satellites to space, as evidenced by the recent launch of an upgraded Long March 11A system, described in a May report from China’s Online People’s Daily.

“The Long March 11A will be able to send 1.5 tons of payload to a sun-synchronous orbit at an altitude of 700 kilometers, nearly four times the Long March 11s capacity,” the paper says.