China Is Making Progress in Space and America Is Taking Note 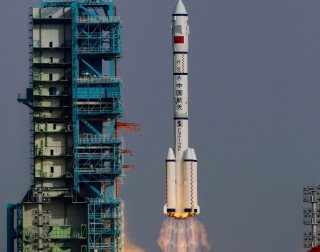 China has fired off a new variant of its Long March 11 long-range carrier rocket intended to launch new, heavier payload satellites with greater thrust and a wider, taller form factor.

“The upgraded variant, called the Long March 11A, will be able to send 1.5 tons of payload to a sun-synchronous orbit at an altitude of 700 kilometers, nearly four times the Long March 11’s capacity to that orbit,” China’s Online People’s Daily stated in a June 1st report.

The launch took place from the Xichang Satellite Launch Center in Sichuan province. The mission, launching two demonstrator satellites, marked the first launch of a 2-diameter fairing and the precedent-setting first use of a solid-fuel rocket, the Chinese report said.

The rocket, according to the Chinese report, is engineered to fire from both land and sea platforms and earlier variants have successfully fired from the Yellow Sea and several land locations. The Chinese paper says the mission scope for the demonstration satellites will “conduct inter-satellite data link and Earth observation tests.”

Interestingly, the Chinese report cites disaster relief and other non-military uses for the satellites. Yet it takes little imagination to recognize the many fast-developing military uses for these kinds of systems. For years, the Chinese have been making progress with a large number of Space warfare technologies. There are several substantial tactical prospects to be considered here, the first and foremost perhaps being missile defense applications such as space-based infrared sensors designed to detect the heat signature of an enemy missile launch. For instance, there is much technical work going on in the United States to explore the possibility of satellites themselves launching and better navigating defensive ICBM interceptor weapons. At the moment, satellites have the technology to detect threats and network information to ground-based command and control, which fire sea or land-based interceptors such as a Ground-Based Interceptor or, in some cases, sea or land-launched SM-3s. However, new innovations are looking at arming satellites themselves with interceptor rockets, seekers with advanced discrimination technologies and even missile-destroying lasers.

Specifically, the Pentagon’s Missile Defense Agency is working with the Navy on power-scaling laser weapons to explore the possibility that, in some tactical scenarios, ships could fire lasers into space as missile defense weapons. Further, industry developers, such as Booz Allen Hamilton executive retired Lieutenant General Trey Obering (Former MDA Director) and other senior weapons developers, explain that the atmospheric environment in space is conducive to laser weapons, as it involves a different air quality.

“If you get above the atmosphere, beam attenuation does not become as much of a factor. In space you do not have to worry about attenuation by moisture,” retired Air Force Lieutenant General David Deptula, Dean of the Mitchell Institute for Aerospace Studies, told me in a previous interview. He said that current Air Force Science and Technology work is focused on methods of countering moisture.

At the same time, there is still much work to be done, as explained in an interesting essay by Obering from National Defense University’s quarterly PRISM Journal, called “Directed Energy is Here...and Disruptive.”

“The United States will soon be reaching the point where it can generate a megawatt of power in a size, weight, and volume capable of being put on a high-altitude aircraft or space-based platform. As DOD works to develop and incorporate these technologies...Much of the work should be collaborative, such as improvements in materials, power generation, thermal control...ect.,” Obering writes.

Sensors built into satellites themselves will increasingly perform more independent command and control functions, in some instances helping to discern the difference between an actual ICBM or nearby decoys intended to thwart or confuse defenses. Most seekers at the moment often rely upon missile-integrated sensors tasked with guiding various Kill Vehicles.

Finally, China is well known to have evolved and tested Anti-Satellite weapons engineered to fire into space and destroy satellites. Bejing’s weapons tests, further underscore many reasons why the Pentagon is fast-tracking weapons and technologies necessary for a future Space War.

“If you had a space-based laser capable of shooting down an ICBM, you could shoot down an ASAT (Anti-Satellite Weapon) weapon as well. It would add a new self-defense mechanism to US constellations, which could add to your resiliency,” Obering told me in an interview earlier this year.

The Long March IIA is 20.8 meters long with a diameter of 2 meters and a liftoff weight on 58 metric tons, the Chinese report says.