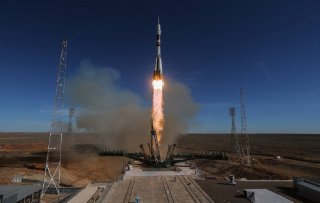 “Russia’s DA-ASAT test provides yet another example that the threats to U.S. and allied space systems are real, serious and growing,” Raymond.

Observers expected the April 2020 trial. It was just the latest in a series of tests of the PL-19. Russia last launched a Nudol rocket back in December 2018.

Direct-ascent weapons arguably are the least sophisticated anti-satellite weapons. Essentially just medium-weight rockets, like the kind space agencies use to boost small payloads into low-Earth orbit, DA-ASATs are cheap to develop and easy to use but only can threaten low-flying spacecraft.

China, the United States and India in the last decade or so also have tested DA-ASAT weapons. The Chinese and Indian tests in particular scattered thousands of pieces of metal debris, any one of which could pose a risk to a satellite or even the International Space Station.

Cosmos-2542’s original orbit allowed it pass within a couple hundred miles of USA-245  U.S. KH-11 spy satellite every 11 or 12 days, according to Michael Thompson, an American graduate student who moonlights with a small space company and, in his spare time, tracks satellites.

Between November 2019 and January 2020 Cosmos-2542 mostly stayed a respectful distance from the KH-11 as the U.S. National Reconnaissance Office satellite went about its business snapping high-resolution photographs of America’s rivals.

Then in mid-January, Cosmos-2542 passed close to the spy satellite -- and made its move. Instead of drifting away like it usually did, Cosmos-2542 performed a series of maneuvers and essentially matched orbits with USA-245.

Cosmos-2542, in other words, was following USA-245. In the event of war, the Russian satellite would be in a perfect position quickly to attack the American sat. Most spacecraft lack effective defensive systems.

The January 2020 ASAT test “is further proof of Russia’s hypocritical advocacy of outer-space arms-control proposals designed to restrict the capabilities of the United States while clearly having no intention of halting their counter-space weapons programs,” Raymond said.

The general apparently was referring to a late-2019 proposal by the Russian space agency that it lead international negotiations aimed at limiting anti-satellite weaponry. Nothing came of the proposal, and the world’s major space powers continue to re-arm with increasingly sophisticated orbital weaponry.

“It is a shared interest and responsibility of all spacefaring nations to create safe, stable and operationally sustainable conditions for space activities, including commercial, civil and national security activities,” Raymond concluded.