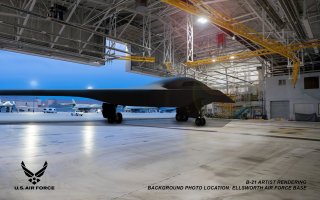 HUNTSVILLE, ALABAMA - “Not today” was the term used by the Pentagon’s highest-ranking military officer to describe the thought process of potential enemies contemplating an attack on the U.S.

The idea, expressed by Vice Chairman of the Joint Chiefs of Staff Gen. John Hyten, represents the critical and well-known paradox fundamental to deterrence: develop massive amounts of weaponry, combat power and military superiority such that an enemy simply would not consider an attack. These weapons are generated for the specific purpose or hope of not having to be used but rather ensuring peace.

Hyten said this in the context of a discussion about Defense Secretary Lloyd Austin’s recent announcement about “integrated deterrence,” a strategic concept intended to sustain peace by virtue of being able to leverage all dimensions of U.S. power in a coordinated fashion if needed.

“Deterrence comes from all capabilities. Integrated Deterrence is not just our cyber, space or nuclear capabilities, but how we might apply them to create problems for an adversary so the adversary decides not to engage. That is the goal,” Hyten added. The idea is to ensure a situation wherein “an adversary looks at us, sees the power that we bring and says ‘not today,’” he said.

The concept of “integrated deterrence” therefore, includes not just missile defense, nuclear weapons or the emerging U.S. Space Force, but rather a need to be prepared for the widest possible range of contingencies across all domains.

Perhaps an enemy might think an advantage can be gained with a ballistic missile attack or some kind of conventional incursion short of using nuclear weapons? In this scenario, the U.S. might simply need to establish an ability to defend against or “shoot down” those kinds of weapons, leading an adversary to realize the futility in that kind of attack. A large element of Austin’s emphasis on integrated deterrence also pertains to innovation, something Hyten also stressed in his remarks. Certainly prioritizing new technologies would help the U.S. prepare itself to respond to unanticipated new kinds of attacks or develop new defenses against them.

Earlier this year, Austin also cited “operations” as fundamental to a multifaceted deterrence strategy, suggesting perhaps that things like forward force presence or deterrence exercises such as bomber patrols might play a significant part alongside any need to develop new weapons.

“Integrated deterrence is about using the right mix of technology, operational concepts, and capabilities—all woven together in a networked way that is so credible, and flexible, and formidable that it will give any adversary pause,” Austin said according to a Pentagon transcript.  As part of his comments, Hyten pointed to the service flags behind him for Army, Navy, Air Force and Marines, explaining that they all had “combat streamers” as a result of have been at war.  He then lifted up the newly established U.S. Space Force banner and said his hope was that a warfare “banner” was never put on that flag.

“If deterrence fails, we have to be able to win decisively so there are no battle streamers on the Space Force flag… but if that does not happen, we have to be ready to fight,” Hyten said