Deterrence, U.S. Grand Strategy, and the Wisdom of Bob Gates 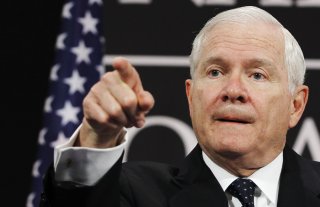 The Biden administration is now working on its national security strategy, a basic set of concepts and priorities that should guide the nation over the next four years of foreign policymaking. At a time of great demands at home, it may be tempted to look primarily inward in developing that strategy. However, it needs to be careful not to go too far in that direction. America’s basic role in the global security order today is sound and does not require radical adjustment.

In the debate over U.S. national security policy and American grand strategy, those who favor restraint and offshore balancing sometimes argue for dismantling some or most existing American alliances. Former President Donald Trump seemed to share that view. The restrainers and balancers are on solid ground when they question the idea of any further alliance expansion—notably, to Ukraine, Georgia, or other former elements of the Soviet Union. They should keep this refrain up at a time when some in Congress and elsewhere are unwisely trying to bring Ukraine into NATO as a response to greater tensions between Ukraine and Russia. But the offshore balancing argument is much less compelling when it extends to the proposition that we should dismantle existing security pacts, and effectively retrench or withdraw from certain key parts of the world.

Former Secretary of Defense Robert Gates was fond of saying that the United States has a perfect record in modern times of predicting when and where future outbreaks of war will occur—it always gets it wrong. That is another way of saying that the United States does not always successfully deter. There is considerable truth to that statement. Some advocates of U.S. retrenchment seize on that statement or make a similar argument to suggest that, if all of America’s overseas alliances and military deployments can never prevent the next big war anyway, why bother?

But the obverse of Gates’s statement is also true. The United States has a nearly perfect record of preventing further large-scale aggression in places where it really pools its efforts national will, resources, and forward-deployed military forces to the task. When the country’s leaders and intelligence analysts can accurately predict the possibility of a future war, the then United States would appear to be fairly good at preventing it.

When the United States is clear about its various interests, commitments, and capabilities, for example in Japan, western Europe, and later Korea in the early postwar years, then deterrence has generally worked—or, to be more precise (since no one can know the counterfactual), deterrence has not failed in these places. Countries will usually not risk war against the United States when they see that Washington is resolute—and especially when it has permanently stationed some of the world’s best military forces in places where they would quickly be implicated in most possible conflicts. Adversaries may try to nibble around the edges, as with China challenging Japan’s claims to the uninhabited Senkaku Islands, but they are unlikely to pose direct threats to core allied territories, populations, or sovereign rights.

Trump inadvertently conducted a “stress test” of sorts on the strength of U.S. deterrence commitments, suggesting especially in the first months of 2017 that his willingness to defend NATO and East Asian allies was very much conditional, at best. Yet no one attacked U.S. allies in this period and we have no evidence that any adversaries even seriously considered doing so. The fact that Trump’s musings about the questionable value of alliances did not lead to any redeployments of American combat forces or abrogations of treaties is probably a major part of the reason why.

None of this means that deterrence is easy, of course. It requires serious will and capability. The latter involves retaining by far the best-armed forces in the world. As for the former, for a country that has been waging multiple military campaigns during virtually all of the twenty-first century, and that has been, in Bob Kagan’s memorable phrase, a “dangerous nation” since its inception, demonstrating a will to fight in defense of core allies is probably a less brittle commodity than American strategists sometimes tend to think. Still, the United States needs a sense of restraint in not viewing the sword as the only plausible response to small-scale security crises, and in avoiding the drawing of first blood or the rapid escalation of any small-scale conflict against nuclear-armed powers to large-scale war.

Gates had it right in some ways, but his aphorism fails to underscore the degree to which the United States and its allies have helped deter great-power war for some seven decades. In times of tumult around the world in many other domains and at many other levels, that is a strategic accomplishment that should not be overlooked. Indeed, it may be the single most important strategic accomplishment the United States could possibly have as a nation and a great power.

Michael O’Hanlon, a senior fellow at Brookings, is the author of the new book, The Art of War in an Age of Peace: U.S. Grand Strategy and Resolute Restraint.