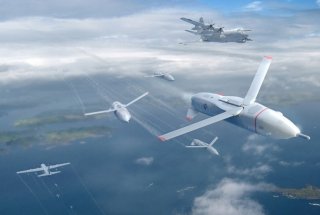 Here's What You Need To Know: A recoverable drone like the Gremlin, at least conceptually, would occupy an interesting middle ground in unmanned aerial systems: one capable and sophisticated enough that its operators might prefer to reuse it when possible, but still cheap enough that it can afford to employed on missions with significant risk of loss.

In November 2019, an old C-130A transport plane took to the skies near Salt Lake City, Utah bearing what appeared to be a hi-tech cruise missile slung under a pylon on one wing.

The Hercules released the missile-like X-61A Gremlin Air Vehicle (GAV), which abruptly rotated stubby wings that had been tucked under its belly into lit-generating flight position. A turbojet engine came to life with a flash and began trailing a plume of smoke.

Over the next 101 minutes, both air- and ground-side controllers took turns operating the 1,500-pound Gremlin’s flight control system—the drone maneuvers by tilting its X-shaped tail fins—and recording telemetry transmitted by the drone’s onboard datalink.

Finally, the Gremlin engaged a drogue parachute to begin a landing and recovery cycle. But then the second main parachute failed to engage, and the X-61 slammed into the ground at high speed, destroying the prototype.

Despite not quite sticking the landing, Gremlin program officials maintain they were satisfied with the prototype’s performance in every other stage of the flight and that they were confident that the final malfunction wouldn’t impede future tests.

In fact, the next flight test due the spring of 2020 will see the Gremlin attempt a more difficult task: docking with its C-130A mothership for in-flight recovery. The program eventually aims to demonstrate the capability for a Hercules to recover four Gremlins in less than thirty minutes. Fortunately, four Gremlins prototypes remain after the accident.

To recover a Gremlin, the mothership first deploys a “bullet” capture probe towed from the cargo bay, a system similar to the flexible mid-flight refueling probes used by the U.S. Navy. The probe latches onto a hook that flips up from the Gremlin’s spine.

Once the X-61 has docked onto the probe, it rotates it tucks its stub wings laterally back into its belly. Then operators reel the Gremlin towards the Hercule, where they will eventually be plucked into the cargo bay by the pincers of an extendible mechanical arm.

The Gremlin was designed by tech company Dynetics and built by drone-manufacturer Kratos, with contributions by seven additional partner companies. It was the final design chosen out of four proposed to a program run by the Defense Advanced Research Projects Agency (DARPA).

However, tests planned in 2019 were delayed when the planned China Lake, California test site was heavily damaged by an earthquake that July. The project had to be moved to Dugway Proving Ground near Salt Lake City, Utah.

What are they for?

Flying aircraft carriers have been tried before. The U.S. Navy operated two huge airships which could launch and recover F9C Sparrowhawk biplane fighters with hooks to latch onto their flying mothership. But both were lost in accidents. Later, an air-launched XF-85 Goblin parasite jet fighter, meant to be carried by nuclear bombers, it was intended to escort, also proved unsuccessful. However, RF-84K photo reconnaissance jets carried by B-36 bombers briefly saw operational service in the 1950s.

Russia, meanwhile, developed a series of modified bombers which could carry multiple fighters, effectively extending their reach for long-range strikes. These were briefly successfully employed during World War II for precision strikes across the Black Sea.

So just what are Gremlins intended to do?

Like the fighters launched by Protoss Carriers in the popular strategy game Starcraft, they’re meant to be expendable but reusable short-range drones launched in volleys that can operate in defended airspace and possibly overwhelm enemies with swarming attacks.

There are several benefits to an air-launch-and-recovery model: it allows the design of smaller, cheaper drones; it means Gremlins can be based more distantly from the operational areas; and that they cost less to operate per sorties. And supposedly, lower cost and size will mean more drones can be deployed on one mission.

A Dynetics document reveals the Gremlin is expected to be compatible with strike and reconnaissance aircraft and ground launchers—not just cargo planes. That implies a Gremlin could be forward-launched by say a jet fighter, then recovered by a transport plane waiting a safer distance away.

And while the Gremlins can be remotely controlled from both the air and ground, they will supposedly be designed to operate as networked, autonomous swarms that share information and implement group strategies, while remaining resistant to jamming.

SEAD, in particular, is a risky business. A drone like the Gremlin offers a way to push jamming and attack aircraft into defended airspace without risking pilots’ lives. Instead of using an exquisitely sophisticated and expensive stealth fighter or missile, a large number of less advanced drones could simply overwhelm an air defense network with targets, and still prove difficult to detect and engage.

A recoverable drone like the Gremlin, at least conceptually, would occupy an interesting middle ground in unmanned aerial systems: one capable and sophisticated enough that its operators might prefer to reuse it when possible, but still cheap enough that it can afford to employed on missions with significant risk of loss.

The Gremlin supposedly can accommodate a 145-pound payload and generate 1.2 KW of electricity which could be used to operate a ground-scanning Synthetic Aperature Radar, electro-optical/infrared sensor, or a laser designator. In the SEAD role, it might also carry “electronic support” and “electronic attack” systems—likely referring to electromagnetic sensors and jammers respectively, though the jamming pods used on U.S. fighters considerably exceed a payload limitation.

But the Dynetics documents also lists “kinetic” payloads, ie. lethal weapons. Munitions that fall within the payload limitation include possibly multiple 42-pound GBU-44/B Viper Strike glide bombs or 33-pound Griffin missiles, or perhaps a single 106 to 115-pound Hellfire or JAGM missile. Given the planned cooperative swarm behavior, potentially one Gremlin could locate and illuminate a target with a laser designator or sensor while another launches the attack.

Just how long and far can the Gremlins fly, though? The Dynetics document specifies a maximum loiter of 4 hours in a 28-mile radius—or a maximum 345 mile radius in over one hour. Those parameters mean that a ponderous mothership might be able to skirt just outside the reach of long-range air defense systems like the S-400 (max 250 mile range), though a Gremlin carrier might still be vulnerable to enemy interceptors.

Dynetics claims a Gremlin’s airframe “turned-around” for another sortie within twenty-four hours of return to base and would remain good for about twenty missions. In theory, these parameters mean the X-61 will remain affordable and cost-efficient, though that’s hard to verify until cost estimates, presumably boosted by production-level economies of scale, become available.

Right now, however, the X-61 program is all about developing the fundamental air-launch and recovery technology that’s prerequisite to making “flying aircraft carriers” work. If tests later this year are positive, then presumably the Gremlins program may begin focusing more on developing mission capabilities.

If the design proves sound in testing, an operationalized Gremlin may represent an important stride towards an era of networked, swarming drone warfare anticipated since the turn of the century.

Sébastien Roblin writes on the technical, historical and political aspects of international security and conflict for publications including The National Interest, NBC News, Forbes.com and War is Boring. He holds a Master’s degree from Georgetown University and served with the Peace Corps in China. You can follow his articles on Twitter. This article first appeared earlier this year and is being republished due to reader interest.