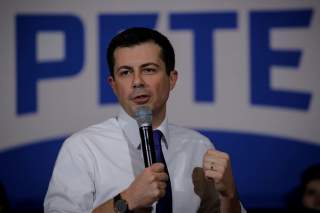 The deficit, and how to eliminate it, is a traditional buzzword in presidential politics going back decades. As Democrats prepare for a longer-than-expected primary beginning with New Hampshire tomorrow, the phrase is making its regular cyclical comeback.

“I think the time has come for my party to get a lot more comfortable talking about the deficit,” said Pete Buttigieg at a townhall meeting in New Hampshire. “Because right now we got a president who comes from a party that used to talk a lot about fiscal responsibility, with a trillion-dollar deficit, and no plan in sight for what to do about it.”

Buttigieg, who is currently polling in second place in the Granite state, has for months tried to replace former Vice President Joe Biden as the moderate in the race. To this end, the former Mayor of South Bend, Indiana has withdrawn his previous support for Medicare for All, and instead crafted his own plan, Medicare for All Who Want It. Buttigieg claims his alternative will come with a much lower price tag.

The candidate’s critique of the fiscal record of the incumbent Republican is not a new tactic. In 1988, after President Ronald Reagan had seen a drastic rise in deficit spending to fund his growing military budget, Democratic candidates from Arizona Governor Bruce Babbitt to Massachusetts Governor (and eventual nominee) Michael Dukakis said they’d oversee balanced budgets through a mixture of tax increases and spending cuts.

The annual U.S. deficit will top $1 trillion this year, which contributes to the total national debt of $23.2 trillion. This afternoon, the White House released its proposed budget for fiscal year 2021. According to the Trump administration, their plan would eliminate the deficit over the course of fifteen years, until 2035. This is a much darker prediction than previously made; Donald Trump’s first budget claimed the deficit would be half its current level by 2020.

Buttigieg believes this is a strong, bread and butter issue that Democrats can use in the general election. “This should concern progressives, who are not in the habit of talking or worrying too much about the debt,” he said. If the deficit continues to grow, it could “start crowding out investment in safety net and health and infrastructure and education programs.”

The candidate’s pledge for fiscal restraint was met with criticism and derision by party progressives. Ryan Cooper, a correspondent with The Week, referred to the former mayor as “the austerity candidate.” Austerity was the financial plan partially implemented in the United States and Europe in the wake of the Great Recession. Governments attempted to cut back on unnecessary spending to benefit the economy. Progressives view austerity as an attempt to cut back on social services and don’t believe it is economically beneficial.