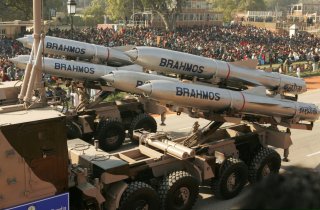 After having informal relations for centuries, India and the Philippines established formal diplomatic relations in 1949, shortly after both countries became fully independent. In the twenty-first century, both countries signed a Joint Declaration for Co-operation to Combat International Terrorism as a complement to the ASEAN-India Joint Declaration to Combat International Terrorism.

The looming threat from China may bring India and the Philippines even closer in the future.

This month, as part of a larger effort to modernize the Philippines’ aging military, Manila announced that it would acquire a new missile system that was jointly developed by India and Russia. Under the deal negotiated with the government of India, BrahMos Aerospace will deliver three BrahMos cruise missile batteries, train system operators, and provide logistical support.

The deal for the shore-based anti-ship cruise missile system is reported to be worth $375 million. In addition to bolstering the Philippines’ military, the purchase will help solidify India’s emerging domestic aerospace and defense industry.

Chandan Kumar Nayak, an analyst at GlobalData, said that India “is expected to earn about $2.7 billion from BrahMos cruise missile export contracts” by 2031. Nayak added that the deal with the Philippines may help India attract more countries interested in purchasing BrahMos systems.

The Indian Ministry of Defence has said that the BrahMos cruise missile is among the fastest in the world. The Philippines, which will become the first country to purchase the missile system, will likely use them to deter foreign vessels—particularly Chinese ships—from encroaching on its exclusive economic zone. Manila previously acquired Israeli-made Spike ER missiles for maritime deterrence.

"It's part of our territorial defense," Col. Ramon Zagala, spokesman for the Armed Forces of the Philippines, told Al Jazeera last week.

The sale of the new cruise missile to the Philippines could be the first of many. The United Arab Emirates, Bulgaria, Greece, Egypt, Algeria, South Africa, Brazil, Chile, Malaysia, Singapore, South Korea, and Thailand have all shown interest in procuring the BrahMos missile systems from India.

"[While] India is relatively a minor defense exporter globally, the country had still managed to export defense equipment with a cumulative value of $315 million over the period 2016-2020," added Nayak. Nayak noted that the BrahMos sale could lead to future deals between the Philippines and Indian defense companies.