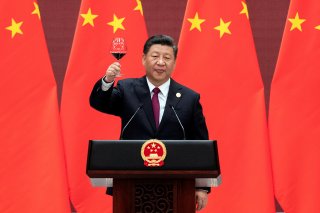 The first images of the much anticipated two-seat Chengdu J-20 have emerged in various news reports, a development which for the first time shines a light on new dimensions of Chinese fifth-generation stealth fighter modernization.

These reports show images of the new aircraft, long rumored to be in development by the People’s Liberation Army Air Force.

The new two-seat J-20, also known as the Mighty Dragon, will likely be referred to as a J-20B, J-20A or J-20S, according to The Drive. The pictures of a two-seat “tandem cockpit” J-20 in yellow primer paint emerging from Chengdu Aerospace Corporation’s plant and flight test airfield.

What does this mean? Will China create a stealthy fifth-generation F-14 Tomcat? Maybe. However, unlike the famous Tomcat of the 1980s, which emerged prior to the large-scale explosion of artificial intelligence-enabled computing, a fifth-generation fighter carrying a two-man crew raises some interesting questions and dynamics. The F-14 Tomcat was built far before today’s artificial intelligence-empowered sensing, computing, targeting, networking and information analysis. Even the China-backed Global Times has questioned the merits of a two-seat J-20.

“The twin-seat variation of the J-20 could be used for electronic warfare, command of wingman drones or bombing, and the domestic engine means the J-20 is no longer reliant on Russian engines,” according to the Chinese government-backed Global Times.

The addition of a second seat to the fifth-generation stealth fighter jet raises some interesting questions. The fighter jet could add new decisionmaking variables to air combat. These variables may include drone coordination, electronic warfare, or intelligence analysis in the air. Should the fighter jet’s connectivity be lost, jammed, disabled or compromised in a combat situation, then its command and control capability could temporarily disappear—creating a circumstance wherein having an extra set of eyes could certainly create a tactical advantage. While a pair of human eyes might not necessarily see any farther, clearer or better than advanced cameras, the presence of a second person might introduce new variations of intelligence analysis.

Many military strategists believe that artificial-intelligence-enabled sensors and computers along with faculties and attributes unique to human cognition are the optimal tools for modern-day warfare. This is known as the “man-machine interface.” It can synergize more subjective variables and attributes associated with human decisionmaking with high-speed, data analysis and organization. Certainly, when it comes to gathering, organizing and performing data analysis, artificial-intelligence-empowered computing and information processing performs exponentially better than humans. But computers may not be able to approximate more subjective phenomena less calculable or measurable by mathematically-oriented computer algorithms. This is where dynamic human decisionmaking offers attributes superior to machines. Thus, combining both humans and machines seems to be the consensus among weapons developers.

It may be that the U.S. Air Force’s experiment last year, which involved using a human pilot in tandem with an artificial-intelligence-enabled computerized co-pilot, offers the best path forward. Maybe only so much can be done effectively by computers in terms of matching threats against a database library, analyzing war scenarios to find the best weapon for a particular situation, or assessing navigational, weather and ground target information in relation to one another in milliseconds. Adding a human supported by a computerized artificial intelligence pilot to the mix may be the best approach.

An artificial intelligence algorithm, known as ARTUu, flew along with a human pilot on a U-2 Dragon Lady spy plane, performing tasks that would “otherwise be done by a pilot,” earlier this year. “ARTUu’s primary responsibility was finding enemy launchers while the pilot was on the lookout for threatening aircraft, both sharing the U-2’s radar,” according to an Air Force news release from 2020.

Computer algorithms enabling near real-time analytics have influenced recent combat simulations and experiments. So why would an extra person be added to themix at a time when humans are increasingly being removed or decreased from operations? Machines are performing vital combat functions more frequently and faster than human beings, increasing the likelihood that more drone technology will emerge in the future.

But how can mathematically-engineered computer algorithms address, express or analyze subjective phenomena such as human feelings, intuition, or elements of intent? Human beings are composed of a delicate and complex mixture of thoughts, feelings, and psychological complexities, many of which simply might not be calculable by machines. Perhaps a pilot gets scared and makes an abrupt, unanticipated move? Can even the best artificial-intelligence-capable algorithms make sense of the motivations behind such decisions? Many of these kinds of more subjective challenges may be much better addressed by humans.