Jet Lag: Why Taiwan Isn’t Ready to Tussle With China 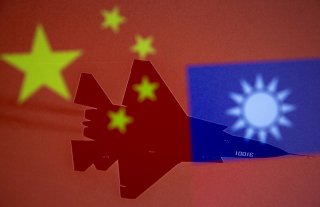 What would happen if China suddenly launched an air attack on Taiwan with stealth bombers, fifth-generation fighter jets and long-range ballistic missiles? Is there the possibility that Taiwan could be quickly overwhelmed? Perhaps the island country would be ill-suited to mount any kind of substantial air defense. The answer to these questions may not please the Defense Department.

Taiwan is merely one hundred miles away from mainland China, so fighter jets or attack planes launched from mainland China will have no difficulty reaching the skies above Taiwan. Thus, Taiwan is likely vulnerable. It may not have the advanced air defense systems or suitable countermeasures necessary to respond to this type of threat. Taiwan does not operate F-35 fighter jets and may not have air power sufficient to challenge or repel fifth-generation Chinese fighter jets in the event of an attack.

Taiwan’s Air Force and air defenses are likely ill-equipped to counter a Chinese invasion from the air, according to a RAND report published in 2016 under the title Air Defense Options for Taiwan. The report recommends that Taiwan acquire more modern surface-to-air missiles, noting that China is “outnumbered in the air.” This dynamic might explain why Japan is spending billions on F-35 jets and the United States makes a regular point of sailing carrier strike groups and amphibious assault ships with F-35 jets in the region to be prepared for this contingency.  Would the U.S. Navy be prepared to launch enough F-35B fighter jets in time to rival a Chinese air assault? Will those jets be close enough at the time of the assault? If so, then there may not simply be enough of them to deter or fully stop a Chinese fifth-generation air attack.

More recently, there has been a wide sphere of reports about various Taiwanese efforts to better arm itself against a Chinese attack. Reuters reported earlier this year that Taiwan is in the process of acquiring U.S.-built Patriot missiles. But these weapons are effective as missile interceptors capable of stopping incoming ballistic missiles but are certainly not capable of hitting Chinese fifth-generation stealth aircraft.

Taiwan is known to operate F-16 Fighting Falcons and French Mirage aircraft, among a few others. Multiple news reports state that Taiwan is in the process of acquiring upgraded F-16V Viper aircraft too. But all of these fourth-generation airframes are unlikely to be in a position to rival any kind of large-scale Chinese assault from the air likely to include Chengdu J-20s, Chengdu J-10s, Shenyang J-15s and possibly even fifth-generation, carrier-launched Shenyang FC-31 Gyrfalcons.

All of this might suggest that any Taiwanese counterattack or defense plan would be likely to rely upon early detection of signs of an air attack. This would allow the United States and other allies to get close enough in sufficient numbers to respond. Another possibility would be to make a pre-emptive or early strike against Chinese air assets while they are still on the ground; however, Taiwan, the United States and its allies are unlikely to fire the first shot in this scenario, despite whatever intelligence warnings they receive. Thus, the U.S and allied deterrence posture must be big enough to ensure China understands that a large-scale, multi-domain counterattack would be certain to follow any kind of Chinese attack on Taiwan. It has yet to be determined if this strategy can succeed in deterring an invasion, although it seems to be working at the moment.