Securing the Sky: Why the Air Force Isn’t Ready for a Next-Gen War 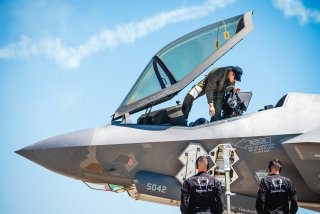 Cutting-edge ideas and proposals for the future of the Air Force include eliminating the F-15EX Eagle II, increasing F-35 production, and beginning a new-start “Multi Role X” stealth fighter program.

A newly released Mitchell Institute for Aerospace report, titled The Future Fighter Force our Nation Requires: Bridge to the Future, outlines a series of innovative ideas intended to ensure the Air Force fleet can sustain global dominance in a world increasingly filled with Chinese and Russian fifth-generation stealth fighter aircraft. The report lists a number of detailed recommendations, including a call to completely divest F-15C/D Eagle, A-10C Warthogs and F-15E Strike Eagle inventories. The recommendations reflect a significant overall sensibility that favors “new” over “legacy,” meaning 1980s-era fourth-generation fighters should move toward extinction and platforms such as an upgraded fifth-generation F-22 Raptor, F-35 fighter jets or sixth-generation Next Generation Air Dominance (NGAD), which will expand even further as defining elements of a future force.

“The U.S. Air Force’s ability to secure the sky is in crisis,” the study suggests.

The thinking expressed in the study seems to be grounded in the belief that Russian and Chinese air defenses are too advanced, precise and effective for older airframes to survive. That’s why the Mitchell Institute for Aerospace report calls for the divestiture of the much-discussed and massively upgraded F-15EX, as it is still a fourth-generation airframe from the 1980s.

“Although F-15C/Ds, the F-16C/Ds, and A-10Cs have all benefited from service life extension and modernization programs, the fact remains that they cannot be upgraded to the point where they can survive in advanced threat environments,” according to the study.

The study recommends continued life for the F-16 Fighting Falcon. This is perhaps related to the role it can play in homeland defense missions and other scenarios where the Air Force has already achieved air supremacy. This may be in large measure based upon the realization that, while much less expensive than new-build F-15EX Eagle II, upgraded F-16 Fighting Falcons can effectively perform any missions requiring fourth-generation technology. For instance, the F-16 Fighting Falcon has received a number of successful service-life extension enhancements, measures which include enhancements to the structure, airframe, weapons and electronics.

Additionally, the study’s support for the F-16 Fighting Falcon is accompanied by a clear calf for a new-build, freshly designed stealthy aircraft able to embrace some of the missions expected for the F-16 Fighting Falcon. Air Force Chief of Staff Gen. Charles Brown has described the Multi-Role X concept as building “something new and different that’s not the F-16—that has some of those capabilities, but gets there faster and features a digital approach,” according to the report.

A “new-start fighter program loosely modeled on the original Lightweight Fighter and F-117 program may be a good idea,” per the report. “If the service wants recapitalization options other than the F-35A and NGAD for the 2030s, it must begin a new-start fighter competition now.” This would leverage the long-term benefits of building a new platform with “open architecture” and common IP protocol standards such that it has the technological infrastructure to upgrade quickly as needed when new technologies, weapons, computing and avionics emerge, according to the report.

Another legacy fighter that receives even more support than the F-16 Fighting Falcon in the study is, not surprisingly, the F-22 Raptor. The study expresses a measure of regret that the F-22 Raptor acquisition program was truncated prematurely, resulting in a lesser-than-expected number of jets. What seems significant about the study is that, despite the rapid progress and promise of a paradigm-changing sixth-generation aircraft, the superiority of the F-22 Raptor as an air dominance fighter is highly cherished as key to the future. This makes a lot of sense when one considers that the F-22 Raptor is not only a stealthy fifth-generation aircraft believed to outmatch any fighter jet in the world, but the weapons platform continues to receive additional lethal weapons, sensors, computing and avionics upgrades. Software upgrades have in recent years greatly hardened the targeting and flight guidance systems of crucial air-to-air weapons such as the AIM-9X Sidewinder and AIM-120D AMRAAM. Expanding range, resiliency, precision and guidance technology on these weapons might increase their versatility should they come up against Russian or Chinese fifth-generation fighters.

Simply put, the Air Force simply needs larger numbers of fighter jets. This recommendation is grounded in the realization that even some of the most advanced fifth and sixth-generation fighters are likely to be lost or destroyed in a high-end conflict against an extremely advanced adversary such as Russia or China. The report uses the term “operational density” to argue that greater numbers of fighters will be needed in the event of some kind of air war.

“The future force must have additional reserves available to ensure operational density and tempo do not suffer from fighter battle damage and attrition,” according to the study.