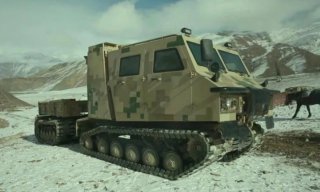 China is preparing to transport troops, weapons, and supplies across its high plateau regions with a new ruggedized all-terrain vehicle designed to work at high altitudes with uneven terrain. The new vehicle is tailored to deter and destroy Indian forces in a ground war.

The new platform, according to the Chinese government-backed Global Times newspaper, is intended to enable logistical support in winter combat should a confrontation with India unfold in the coming months. Chinese reports say the vehicle is made with flat, metalloid caterpillar tracks able to tread over slopes of thirty-five degrees and deliver one and a half tons of supplies.

The Chinese report said the vehicle was requested by the People’s Liberation Army Xinjiang Military Command in the Western part of the country.

“The unit that commissioned the new vehicle is garrisoned at a high-altitude, snowy border region that is extremely cold, lacks oxygen and has a complex terrain, which causes difficulties in logistics support including the transport of supplies,” the Global Times reports. The new all-terrain platform appears square and box-like with ruggedized tracks to enable logistical support missions at altitudes of five thousand feet.

Photographs of the new vehicle available in the Global Times show a box-like square configuration ostensibly engineered to withstand rigorous uneven terrain. However, given the steep incline of terrain in the region and the presence of rocky ledges, it may be unlikely that a vehicle in that shape or size would be able to navigate steep, uneven rocky areas at high altitudes. The vehicle may simply be too large and lack the agility to perform the missions it was envisioned as being able to perform. The vehicle does look like it could travel across plateau areas. However depending upon the altitude, it would seem difficult to actually get a vehicle of this kind up to those locations, unless it was transported by a large heavy-lift transport plane.

While a lot of the vehicle specs such as weight, speed, engine efficiency, suspension, or armor composition might not be known, photographic renderings of the platform show a tracked vehicle that could be airdropped or sling loaded beneath a large helicopter or possibly even drive off of a transport aircraft.

Simply put, the vehicle does appear as though it could traverse rigorous or uneven terrain to a certain extent, but by no means could it actually climb a mountain, sustain sufficient cargo transport missions, or enable maintenance of power aerial aircraft. In this respect, if the vehicle actually did arrive at a high-altitude plateau, it could bring some tactical utility in the sense that it costs to coordinate logistics between mountain outposts or forces on scout missions. But it does not look armored enough to offer any actual combat utility apart from simply safeguarding against small arms fire. Plateau regions have small ridges and uneven areas where a vehicle such as this could potentially bring some operational value, should groups of forces need to be sustained with food, water, weapons, and ammunition in austere, high altitude locations.