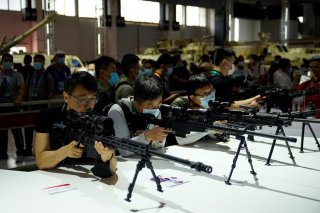 Most eyes at an air show are trained on the sky above. But at the recent Airshow China 2021, China North Industries Group Corporation (NORINCO) instead unveiled something that will be used on the ground: the new-generation service rifle for the People’s Liberation Army (PLA). The QBZ-191 5.8mm rifle and two other firearms in the 191 series were introduced to the public last week.

However, China South Industries Group Corporation has said the weapons have already received positive feedback from the PLA soldiers and officers who have been equipped with the weapons.

The QBZ-191 was first revealed two years ago during a military parade in Beijing to celebrate the 70th anniversary of the founding of the People’s Republic of China, the state-owned Global Times reported. However, it was at the Airshow China 2021 that members of the public were able to actually see–and even hold–the weapons up close.

It is likely that the weapons weren’t functional, given China’s strict gun control stance and standard practices at trade shows for military hardware and firearms. However, it is noteworthy that the public was provided any “hands on” time with the firearms.

Members of the PLA were seen in a state media released video in April 2020 using the next-generation QBZ-191, which is set to replace the QBZ-95-1 bullpup that had been in service in 1997. The video, which was released on state-owned broadcaster China Central Television, marked the first time the weapon was seen since it was revealed during the October 2019 parade.

The assault rifle features a more “traditional” layout, including a magazine forward of the pistol grip. Visually, the weapon is similar to the American AR-15/M16 platform as well as modern European assault rifles including a full-length Picatinny rail on top. The infantry version will have a 14.5-inch barrel while the marksman version will have an even longer barrel. The QBZ-192 carbine version was also seen in state media with a 10.5-inch barrel. It was reported to be used as a personal defense weapon for vehicle crews rather than frontline soldiers.

“Compared to the QBZ-95, the QBZ-191 uses a conventional configuration with greatly improved ergonomics, ambidextrous usability, and better reliability across different environments,” a designer of the QBZ-191 series, who asked not to be named, told the Global Times.

“Now the 191 series rifles have been used by the PLA in all kinds of environments within the country’s territory and have performed very well,” the designer said. “Very soon the PLA and the armed police force will be fully armed with these new rifle.”

The QBZ-191 series is expected to fully replace the QBZ-95 series used by many troops in the PLA and the Chinese Armed Police Force.

The new QBZ-191 rifle is a gas-operated short-stroke pistol assault rifle, and is chambered in the standard 5.8x42mm caliber. It utilizes a new type of round that has been designed to perform better on medium to long-range.

The QBZ-191 and QBZ-192 were among several new firearms that were on display at the NORINCO exhibit hall at Airshow China 2021. Also present was a designated marksman rifle or high-precision rifle of the 191 series, the QBU-91, as well as two new machine guns, the QJB-201 5.8mm and QJY-201 7.62mm. The former light machine gun was reportedly developed for use by airborne troops, while the latter model would be used by the infantry.