The Plane Iran Would Use to Fight America (Thanks to Russia) 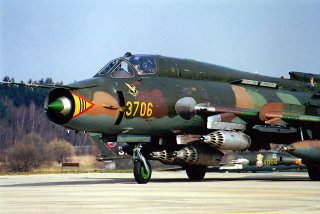 The Su-22 was the Soviet Union’s export version of the Su-17, the first variable-swept wing fighter produced by that now-extinct superpower.

Despite its age (the first Su-17s were designed and built in the mid 1960s), the Su-22 platform continues to fly in a number of countries around the world, due to its wide export among Eastern Block nations and to countries with friendly ties to the Soviet Union.

A single-engine fighter-bomber, the Su-17/Su-22 family was designed to have better low-speed handling and lift characteristics than its predecessor

Interestingly, Iran’s Su-17 fleet is not operated by Iran’s Air Force, but rather the air wing of the Islamic Revolutionary Guard Corps. In 2015, Iran transferred a number of Su-22 to Syria, where the fighter-bombers served a ground attack and reconnaissance role — a role they are particularly suited for in the 21st century.

In 2018, Iran’s Islamic Revolutionary Guard Corps moved to upgrade its fleet of Su-22s. In an apparent admission of the platform’s limited capability, the Iranian Mehr News Agency said: “the Sukhoi SU-22, despite having excellent flight capabilities, e.g. flying at the speed of two point one (2.1) Mach, and at an altitude of 50,000 feet, is not a modern aircraft equipped with new arms.” This could explain why the Iranian Su-22 fleet was grounded for “28 years."

10 Sukhoi’s were overhauled for the Islamic Revolutionary Guard Corp by “IRGC military-technical experts and Iranian knowledge-based companies.” Their ordinance capabilities were upgraded, giving them improved air-to-ground and air-to-air capabilities, assumed to be the ability to carry a wider range of higher precision weapons.

Perhaps the most significant upgrade (if the Mehr report is to be taken at face value), would be the ability to network with UAVs. This could add 10 new nodes to the IRGC’s information gathering and dissemination network. There are apparently plans to equip the Su-22s with air-launched cruise missiles in the future as well.

In 2015 Poland also upgraded the Su-22s they inherited from the Soviet Union, giving the airframes a new light grey camouflage pattern to match their Lockheed Martin F-16s. The hope is to keep all 18 airframes combat-relevant for another 800 flight hours, calculated to be about 10 years. Poland is the only European country that still operates Su-22s.

Even with the upgrades to Iran’s IRGC Su-22s, would they be able to give American or any American-led coalition a run for their money? Unlikely. While relatively capable compared to their contemporary aircraft, the Su-22s are in general limited by dated avionics, and by their almost antiquated offensive weapons, though against an enemy with a limited or nonexistent air force and/or anti-aircraft capabilities, such as the anti-regime forces in Syria, the Su-22 excels.

Their value to the IRGC come not so much their ability as fighter-bombers, but as information relay nodes. The ability to network with UAVs and both father and relay information to the IRGC could be useful in the event of a conflict — until they get shot down.